Okaaaay, what kind of fuckery has been going on at the Standing Rock Reservation over the past few days? If you haven't been following the developments, I'm listing a lot of them here for maximum smad.

First of all, it came out that the DAPL was originally going to run through Bismark, but it was diverted because the white people living there didn't want it to poison their water. 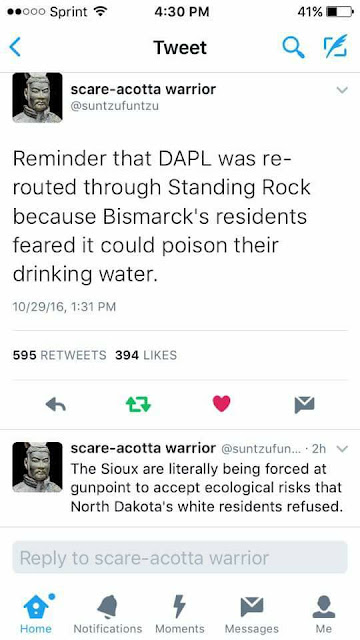 And then there's the fact that arrested protesters are apparently being marked with numbers written on their arm and shoved into dog kennels where they have to sit and sleep on cold concrete in large groups. The police then basically admitted that this was true, saying:

Temporary holding cells (chain link fences) have been installed into the Morton County Correctional Center and are used for ‘mass arrest’ situations only. They are temporary until the Correctional Center can get them processed into our facility or transferred to another facility in North Dakota. The temporary housing units have been inspected and approved by the ND Department of Corrections.


Oh well if it's been approved by the Department of Corrections then it MUST be fine.

Nearly 200 people have been arrested at this point as police continuously ramp up their efforts to stop the protesters. Construction of the pipeline is also accelerating and is almost complete. Sioux leaders are preparing for a last stand to try and prevent the pipeline from entering the river.

Meanwhile, my fellow white people continue to be incredibly racist and disrespectful but not only dressing up as Native Americans for Halloween, but dressing up specifically at Sioux water protectors.

CAN YOU FUCKIN' NOT.

The odd spelling in the photo of the right I guess is supposed to be imitating an accent, maybe? Which is even more disgusting and I hope these people are identified and fired for being horrible fucking people who don't deserve the land they live on.

Though I don't think that Hillary Clinton has said anything herself on this issue, one of her spokespeople made the following statement:

“Now, all of the parties involved — including the federal government, the pipeline company and contractors, the state of North Dakota, and the tribes — need to find a path forward that serves the broadest public interest,” Hinojosa added.


The pipeline company, contractors, and the state and federal government's goons need to get the fuck off of Native land. That's what needs to happen. The interest of the Native Americans who own that land is all that matters. This pipeline is illegal. Fuck you, Hillary.

If you want to help but can't actually go there (I really wish I could), protest leaders are asking people to "check in" on Facebook at the Standing Rock Reservation because police have been monitoring these check-ins and using them to target and arrest specific protesters. Assholes. Here are step-by-step instructions to make this more effective.

Good news: Standing Rock protesters have raised over a million dollars through crowdfunding as more and more people step up to help them in their efforts to resist this new genocide effort. You don't need to share this part too much, though. Those people can't get enough money. Send them more money if you can. They need to feed, clothe, and shelter around 670 people, plus they need medical supplies because lol cops. Oh, and legal fees.

The U.N. is now formally asking that construction of this pipeline be stopped and Amnesty International has send "human rights observers" to the protest site to monitor the situation. Anonymous has also joined in, addressing a warning video to the government of North Carolina.

There's way more but I that sad mad is turning into intense despair so I'm gonna stop.

I just completely and utterly hate that I belong to a country that does this. Our government is participating in a long, slow genocide of the native peoples. We want them dead and gone. It sickens me to my very core. They suffer more violence, mental illness, and poverty than any others in the U.S., and we continue to take from them. And we'll keep going until we've taken everything. That is the USA.

I wish I could be there to stand with them.
Posted by Not Sorry Feminism at 3:00 PM