This is kind of old but pretty much perfect.

Hollywood police are hunting for two women who drugged their victims' drinks and stole their Rolex watches.

The victims, both men in their early 50s, invited the suspects to their house after meeting them at the Porterhouse Bar in Sunny Isles on Jan. 7, NBC Miami reported.

The women, who are believed to be in their early to mid 20s, made them drinks in the East Hollywood home. The next thing their victims remember is becoming sleepy and waking up without their Rolex watches, leading them to believe the beverages had been spiked.

One of the men also found that five watches had been stolen from his safe.


I found this out because someone posted this: 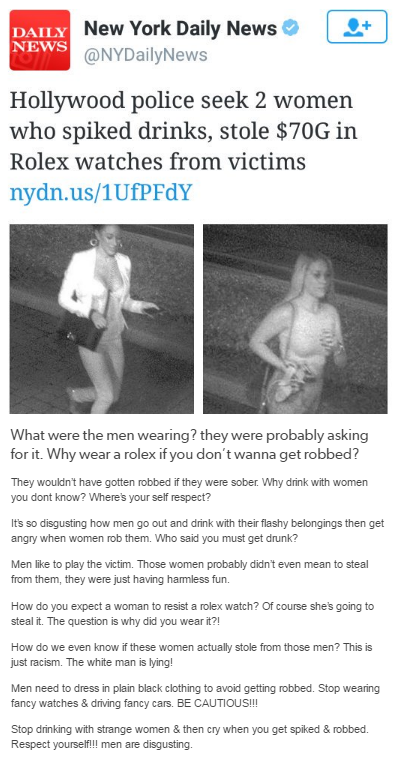 I have to say, I 100% support the trend of young women like the ones in the photos above drugging men's drinks and stealing their shit, then all other women victim blaming these old rich fucks. I mean honestly, they do deserve it for going out and creeping out on women thirty years younger than them. And you don't need all those watches. Redistribute the wealth. If I were single I might do this and just donate the money from the Rolexes to charities for single mothers.