Can the Olympics Not Be Sexist for Two Seconds

For the love of god, in the year 2016, can we please start referring to female Olympic athletes by their names and stop giving the credit for their accomplishments to men? 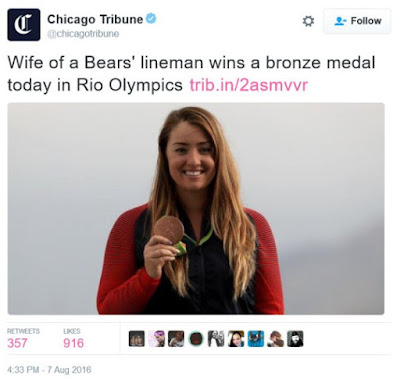 What's this medalist's name? Who cares! All that matters is that she's a wife to some men's sports guy.

As the Washington Post reported, Hicks deemed Tusup "the man responsible" for making his wife into the powerhouse she is today. Someone should probably notify the judges, so that Hosszu's medal can be re-awarded accordingly. Viewers were quick to call out Hicks' wording.


Of course, Mr. Hicks doesn't see anything wrong with giving all the credit for this incredible, record-breaking gold medalist's success to a dude.

On Sunday, Hicks refused to walk back his comments. He maintained that Hosszu has spoken to him of Tusup's integral role in her success; how he drove her to train harder and rebuilt her confidence after she lost the 400-meter IM at the 2012 London Olympics.

"It is impossible to tell Katinka's story accurately without giving appropriate credit to Shane, and that's what I was trying to do," Hicks said, according to the Associated Press.


There's a mountain of difference between "giving appropriate credit" and saying her husband is "responsible" for her record-breaking run. Fuck you, Hicks. Fuck you right off a cliff.

In a world where we have a refugee Olympic team and have both a trans man competing on a men's team and an intersex woman competing on the correct team, can we maybe cut down on the sexism?
Posted by Not Sorry Feminism at 12:11 PM