So over the weekend, I suddenly started getting a ton of traffic from Facebook to one of my Dragons Are Feminist Icons posts, I think the first one. Then I started getting snotty comments.

A quick search for the title of the blog post on Facebook led me to a gross Facebook page all about mocking the dreaded "SJWs" and Tumblr posts. Somehow they'd found my two-year-old post and in short order I had a brigade of losers on my blog who all thought they were very clever but were actually using quips and arguments I'd already heard many, many times before and had ready counters for. Classic anti-social justice buffoonery.

So I spent a couple hours yesterday having fun getting them all riled up and generally messing with them. I eventually got bored and closed the comments section but feel free to check it out if you want some amusement.

The best part is that any feminist or social justice activist would likely get in three seconds that I only created the original post to make people like that all mad and once again demonstrate how they're the ones who are overly sensitive. Worked like a charm. They didn't even get it after I kept responding to their comments telling them how jealous they are that dragons are for feminists only now. 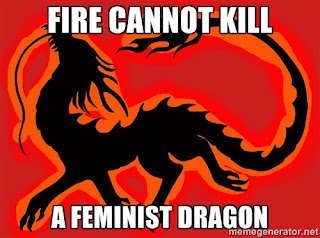 Check this out, there's an entire blog called Feminist Dragons. The word is spreading!
Posted by Not Sorry Feminism at 11:16 AM