Alert for Attendees of the University of North Carolina: Christopher J. Halkides

A professor of the University of North Carolina Wilmington, Christopher J. Halkides, has been spending a lot of his time going around to various article and blog posts about campus assaults to argue against consequences for rapists and generally defending men accused of sexual assault and rape, including Brock fucking Turner.

He showed up on my post, "Rape Culture At Its Finest," about people fretting that warning other colleges that a student was kicked out for sexual assault would be like a "scarlet letter" (barf) that would hurt their poor futures :( :( :(. Not only did he use really bad math, trying to bullshit something about because a university "tribunal" on sexual assault cases only needs 51% certainty to find a student guilty, that somehow means that 25% of those accused will be innocent. This is, of course, complete bullshit because we have actual statistics on false accusations for crimes, and in the case of sexual assault and rape, false accusations are no higher than they are for any other crime. So the real math is that 2-8 percent of those accused will be innocent, and not all of them will be found guilty. Not all of the guilty parties will be found guilty either, but Chris isn't concerned about that.

So there are two reasons to avoid this professor at all costs:

He also has no understanding of the realities of the U.S. criminal justice system. Or he has a great understanding and will do anything to keep it as it is - completely non-function for sexual assault victims.

In case he deletes his comments, I got screenshots! 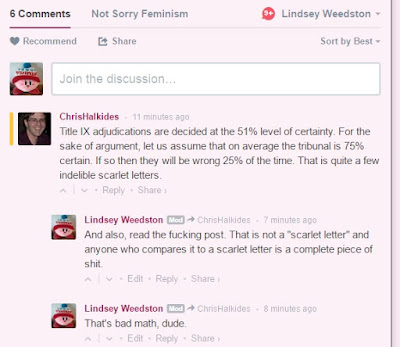 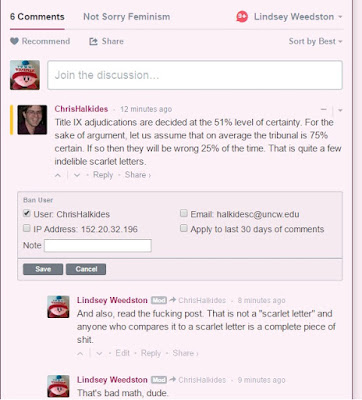 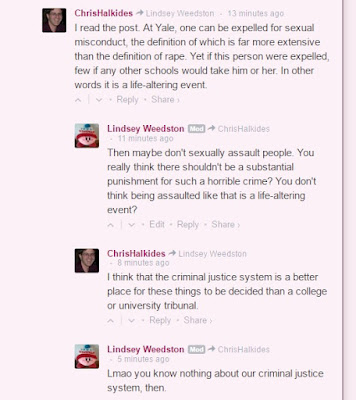 And it's not just on my blog. Halkide's Disqus comment feed is full of him doing nothing but upholding rape culture and complaining about how mean Title IX is. In fact, it looks like he copy-pastes the same arguments over and over, using the same pseudo-intellectual language to try and cover up the basic argument of "colleges are too willing to find students guilty of sexual assault." If you've been paying attention at all to actual cases of campus assault, you know that's the opposite of the truth.

Bottom line: Christopher J. Halkides spends an awful lot of time trying to drag us backward into the depths of rape culture and allow rapists to get away with their crimes. He should be avoided at all costs. Do not trust this man. Do not even be alone with him.

You can also find the contact information for the chair of the university's Department of Chemistry and Biochemistry here.
Posted by Not Sorry Feminism at 3:00 PM