This weekend was an amazing and much-needed vacation with a bunch of awesome women. We spent most of our time relaxing and joking together. It reminded me of the importance of spending time with other women in all of our awesome female-ness. One day was spent doing our makeup, making flower crowns, and taking selfies. Because that's what we wanted to do.

Also one of my selfies came out so goddamn good, check it: 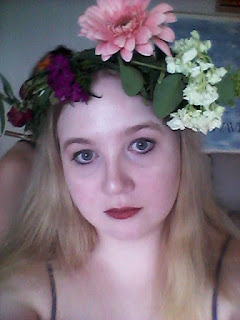 Probably my favorite part of the weekend was when we watched a VHS of The Little Mermaid that we found in the house and came up with an elaborate analogy between the film and the 2016 Democratic primary. Hillary Clinton being Ursula, Bernie Sanders as Scuttle (the seagull), America as Ariel, Jon Stewart as Sebastian, Fox News as the French chef, Bill O'Reilly as his cleaver... It wasn't a perfect analogy but not bad for how drunk we were, and hilarious as fuck.

I'm so glad I decided to take this time to take care of myself, and I'm lucky that I'm privileged enough to be able to do so. I hope everyone else was able to engage in some self care this weekend. You all deserve it.
Posted by Not Sorry Feminism at 10:30 AM