It's been a bit since I've gotten an email worth responding to. This isn't necessarily one of those, but I've received multiple comments about a particularly popular post about the raised fist in the female symbol that's frequently used by feminists without knowing its origins. It's time to put this annoying debate to bed since no one can be bothered to read the comments section of Feminism and Cultural Appropriation, where they would see me explaining multiple times to multiple people that yes, it is cultural appropriation.

I want to start off by saying I am an intersectional feminist so this not a white feminist rant. I came across your post about the feminist symbol being appropriated from black culture. I know many things are appropriated from black culture, but this is not one of them. The person who told you this was misinformed, and again this is not a statement of white privilege it is simply a statement of factual information that ANYONE can easily research.

The raised fist was used long before the black power movement of the 60's. The clenched fist dates back to ancient Assyria. The Goddess Ishtar was depicted raising a clench fist. The raised fist was then used as a logo by industrial workers of the world in 1917. Does this mean the black power movement appropriated it from them? The graphic symbol was popularized by a print shop in Mexico in 1948. It It's since been picked up and used by oppressed groups around the world. Combined with the Venus symbol it's the symbol of all feminism. This symbol was decided upon in New York state congress upstate where suffrage movement begain. It was a collective deciding by millions of circles of women who than came together in Sryacruse. There is a very famous photo of two feminist black and white with raised fists.

It's good to know you're so intersectional. Did you know that the term intersectionality was coined by Kimberlé Williams Crenshaw, a black woman, to describe the experiences of black women specifically, and that throwing the term around without ever crediting her is yet another way we white feminists have stepped on black women and appropriated their work?

Let's start off by discussing the origins you're claiming. It's difficult to determine the actual origins of the raised fist icon. Many people have come to me claiming many different origins. But if we're going with ancient Assyria, let's consider the racial demographics of that area. Evidence points to them being Semitic, Arab, and/or black. The nation was at one point conquered by the Persian empire. Art from that time depicts dark or olive-skinned people with black, curly hair. Therefore, according to your theory, the raised fist symbol has still been appropriated from people of color.

However, the point that people continually ignore is that regardless of the origins of the raised fist symbol alone, which certainly has a long history and was very likely invented by multiple cultures across the globe before they even had contact with one another (like dragons), the iconic raised fist inside the female symbol is absolutely a creation of black feminists/womanists from the 60's. They used a specific style of raised fist - that of the black power movement. This is the specific symbol that white feminists have been appropriating, using on their blogs, tattooing on their bodies, etc. 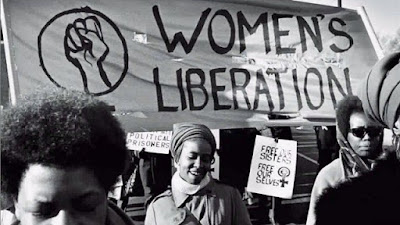 The image with the fist in the circle and the one on the lower sign in the above image was appropriated by white women of the time and continued to be until we got shit like this: 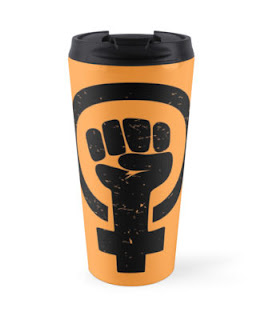 I'm not saying and have never said that no raised fist iconography can be used by people who are not black. However, especially us U.S.-based white people, we need to be careful about that use and at the very least acknowledge the black power movement and its iconic use of the raised fist. Even if they didn't invent it, we have a very specific history in this nation surrounding our treatment of black people and our ongoing, horrific attempts to crush the black power movement. Feminists who fail to acknowledge this are not being intersectional in the slightest and are, in fact, shitty racist white feminists.

Okay? That's what's up. I'm going to put a link in the original blog post to here so that hopefully I don't get anymore annoying emails about this. I already had to close the comments section of that post months ago. My fellow white feminists are embarrassing themselves, being nearly as annoying and whiny as anti-feminist men that come here to bother me. Stop it.

Lindsey "Not Fucking Sorry" Weedston
Posted by Not Sorry Feminism at 1:00 PM