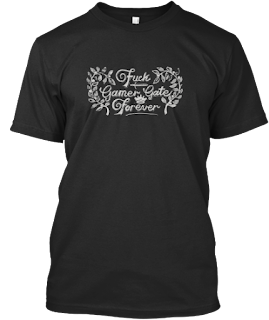 An article posted today on The Establishment has effectively outlined something I've struggled with in my young career as a freelance writer and something that might be called a journalist, as well as a feminist and social justice activist. Writing is one of the things I'm best at, and I try to use it for good. But, like with anything else, writing is a tool that can inadvertently cause harm if not wielded carefully.

Arthur Chu is another witness to and something of a causality of the rise of "GamerGate." He's been there as long as I've watched it progress, through every new surge of attention it gets because of a new controversy that came along or was manufactured by its ranks. He's also a writer.

Today he posted an article about how the media, especially online written media, has compounded the harm done to women like Zoe Quinn who have been targets of GamerGate and similar harassment groups. In the pursuit of a good story and the desire to capitalize on what people are interested in, writers and journalists have brought far more attention to GamerGate than they ever deserved. Many of them think they're helping, but are they?

“Raising awareness” is an important long-term goal in keeping people from being abused overall, yes—but individual victims of abuse mostly want awareness decreased, they want the hypervisibility they live under to stop. Raising money, raising votes, building organizations—these are all valuable goals, but they come at the very real cost of the ability of people who actually live within these “newsworthy” controversies to live in peace.


I myself have written about GamerGate numerous times on this blog, and I even mentioned it in a Yes! Magazine article. On my Tumblr account, I've keyboard screamed at many a GamerGater, trying to argue them into seeing how their movement is built on slander, abuse, and harassment - and inevitably failing each time. And after each failed attempt to change the mind of a person who was never, ever going to change their mind, wondering if any of that was worth it. And even wondering, am I just making things worse?

Am I fueling their fire, making them more determined to harass other women? Do they take the anger built up from arguing with me (because I'm a damn fine arguer when I'm writing it out) and attack women like Zoe with it? I'd tell myself that maybe I'm drawing their ire away from women who are constantly bombarded with it, but was that true, or was I kidding myself?

Am I just giving undeserved recognition and legitimacy to this non-movement, this hate mob, every time I write that ridiculous word on my blog? Was I, with every other writer doing thinkpieces on the issue of online harassment, just making them stronger? Then again, is anything better for women like Zoe now that the mainstream media isn't paying attention to them anymore? Apparently Zoe's ex is simply denying that the case is over, just like he's denied that she withdrew her restraining order against him, and is continuing to rile up the ranks of his hate mob on a regular basis.

I've thought about this as well when trying to tackle TERFs. Every now and again I'll push back against their bullshit posts, trying to call out their lies and twisty turny logic, but that again never seems to do any good. TERFs have budged exactly as many times as GamerGaters have (zero) during my arguments with them, and I just seem to get them fired up. Not only that, arguing on Tumblr involves reblogging the original posts to your own blog with your reply, and then they reblog your response with the original post, and on and on until you have a long thread.

So once again I feel like I'm amplifying TERF voices, and worse, exposing trans people to their hateful rhetoric. I've had trans people say that they've had to unfollow me, not because they disagree with what I'm saying or don't appreciate it, but because it's triggering to see that. I don't blame them at all. It feels like all I'm doing is tainting what is supposed to be a safe space with entirely unsafe bullshit. How am I at all helping?

It's a frustrating situation to be sure. As Arthur Chu says, we writers have a responsibility to think about this and do the best we can to minimize any harm. That's the shitty thing, too. GamerGate and Zoe's ex go on and on about the importance of "free speech," but I want to restrict my own speech for fear of inciting a mob against others. And of course, we all somewhat live in apprehension of the day the mob comes for us.

Because, actually, it is about ethics in journalism.

Posted by Not Sorry Feminism at 4:20 PM