It's time for some local black history. Seattle has had a racism problem for, well, the exact amount of time the city has been in existence. In particular, gentrification and housing discrimination has been an ongoing problem that pops up every few years when one part of the city starts becoming popular.

Racial housing discrimination was legal in Seattle until 1968, four years after the passing of the Civil Rights Act. There were many protests, sit-ins, the ousting of the pro-open housing mayor, the kind of fretting about constitutional rights to racism and fear of giving up privilege we still see today, etc. 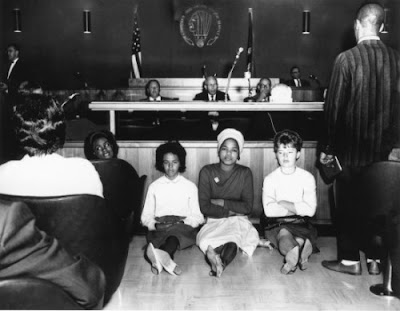 The four women/girls above participating in a sit-in to protest the fact that the city's Human Rights Commission only included two black people out of 12. I'm guessing the rest were white. The women's names are, from left to right, Delores Hall, 18; Jackie Ellis, 11; Infanta Spence, 20; and Susan Van Dong, 20. I love it. They just sat themselves in front of the commission and refused to move. We need more action like this.

You can read more about it on the Seattlish blog, which I'm beginning to love.
Posted by Not Sorry Feminism at 1:00 PM