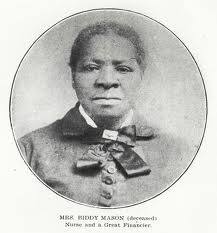 Ok, so, Biddy Bridget Mason is without a doubt one of the coolest people I've ever heard of.

She was born a slave in Mississippi to a Mormon couple who decided to march their cattle over to Utah (because Mormons) , and of course they took slaves to help, including Mason. Later, they took the group of slaves to California to look for gold. At some point, Mason found out that slavery was illegal in the state of California at the time, so she fucking took her slave masters to court and got all of their slaves taken to the state freed.

That in itself is amazing and awesome considering the fact that slaves were not given access to shit like laws and the education to read and understand laws. But it doesn't end there. She proceeded to amass a fortune and shape the landscape of what is now downtown LA. Then she gave back to the poor, founded a church, visited prisoners, and continued to be fucking awesome until she died.

You can read more about her legacy here. God damn, she was awesome.
Posted by Not Sorry Feminism at 11:04 AM