Let's learn about the Black Panthers! 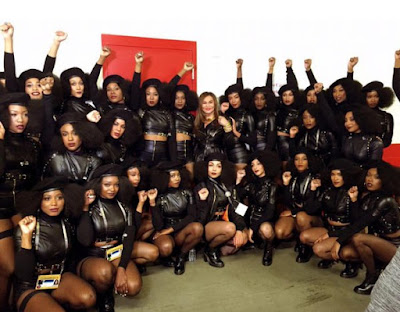 As I mentioned, my fellow white people got really freaked out about the Black Panther imagery during Beyonce's half time show performance. And they continue to freak out. It's pretty funny. But also not great because it's a reminder of how we've all been taught that the Black Panther Party were violent terrorists when actually they existed to fight the KKK and keep racist, violent cops from constantly beating and murdering black people.

We could really use them around again.

Unfortunately, the FBI launched an operation to systematically destroy and dismantle the Black Panther Party. Under COINTELPRO (counter intelligence program), they targeted leaders of the BPP and Dr. Martin Luther King, Jr. with methods that were often illegal.

Also, black women had a heavy presence in the BPP, with anywhere from 40 to 70 percent of the members being women by 1970.

Comparing the BPP to the KKK, as many white people have been doing lately, is incredibly offensive for many reasons. The BPP didn't lynch anybody or burn any churches to the ground, and the KKK didn't make a habit of organizing meal programs for their community.

If you want to learn more about the reality of the BPP, not the bullshit our white-centric public school textbooks tell us, there's a documentary coming out on the 16th called The Black Panthers: Vanguard of the Revolution. Can't wait.
Posted by Not Sorry Feminism at 11:31 AM