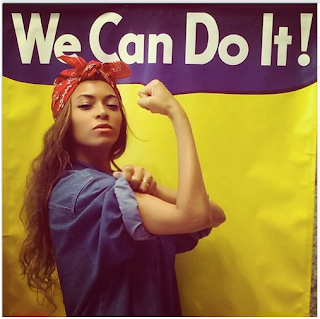 I've been doing some serious thinking lately. Honestly, I'm getting tired of saying the same things over and over. The things the feminist community (at least the one I know) has been saying are extremely important and they need to keep being said until everyone so tired of it that they actually do something about it (since our society doesn't seem to be able to create positive change out of, I don't know, compassion.) But I think for myself, I'm ready to move on to taking some concrete action.

The first step is to assess where feminism is right now. Feminism is often defined in "waves" after the fact. Some might call the current state of feminism the "third wave," which is defined by a focus on greater inclusivity and its shift in thinking about sex work. Feminists are still often very divided on these topics, so maybe it's appropriate to say we're still in this wave.

But it likely depends on where you stand within the community. The Internet has been a huge factor in the shift in how feminism is experienced for most women. These days, whether you experience feminism through blogs and comment sections, Reddit, Facebook, Twitter, or Tumblr likely gives you a different view on the dominant themes of today's feminism. I've come to realize this based on how feminists, anti-feminists, and everyone in between talks about the movement.

I've had anti-feminists come at me with accusations of all feminists believing in a certain thing or doing a certain thing when that has not been my experience at all. Of course, you can't rely on anything from anti-feminists. But I've also seen trans women and women of color, both groups that have good reason to distrust feminism, lament about behavior that is not typical in the feminist circle I've cultivated on Tumblr. I'm not denying that it happens nor am I saying that I'm not culpable. If I want to call myself a feminist, I need to clean up the garbage in the larger community. But its made me realize that my feminist community is likely quite different from other feminist communities.

Nowhere is this clearer to me than within the radical feminist community on Tumblr. This ranges from women who are "gender critical" to those who openly claim that all trans lesbians are male rapists (which is fucking horrible because there are plenty of trans women who have actually been raped by cis women, you fucking pieces of shit). Whorephobia is also rampant in this community, whether it's open hostility toward female sex workers or the tendency to condescendingly speak over them to tell them what they need and how they should feel.

That is not my community, but I still work to call out and clean up this aspect of feminism.

And, of course, we have a lot of new famous white feminists like Emma Watson and Jennifer Lawrence who are absolutely embodiments of largely useless and pandering white cis feminism. Many of our most famous feminists widely ignore the issues of women of color, trans women, LGBQAIP+ women, disabled women, mentally ill and neuroatypical women, and fat women. This has always been a problem and it still is. Though it may be true that, thanks to the Internet, more feminists are aware that this is a problem and we are less willing to tolerate it.

So the community still endures some pretty strong divides and problems. But in spite of this, a lot of positive things have happened in the past couple years that have successfully endured the predictable backlash. College campuses are still being held more accountable for shitty handling of campus rape. A couple famous serial rapists have been ostracized, denounced, and abandoned by former sponsors. MRAs have been widely mocked back into their little holes as the larger society has become aware of them. Inclusivity and body positivity campaigns have seen success, although there's still much more to be done. Beyonce.

I have observed, at least in my community, a greater focus on the issues of women who experience additional axis of oppression.

So what's next? I have for several years remained firm in my belief that change starts with upcoming generations. And I don't mean leaving this all to teen girls to figure out. I mean that we need to get involved with little children. Literally as young as possible.

Before you start screaming about feminist brainwashing, I'm actually just talking about teaching young kids about the importance of consent and personal respect. Teach kids not to touch one another without asking first. Not to take others' toys without asking first. That they're allowed to say no to any adults, including family members, who want to hug or kiss or hold them. Teach them that violating any bodily consent is a terrible offense that should never be tolerated except maybe in emergency situations. Teach them not to interrupt each other. Explain to them that even though there's a lot of violence on TV and in video games, in real life, that kind of thing is never okay.

And then demand that adults stop undermining these lessons.

I seriously am starting to think about how I could organize some kind of campaign and/or organization that goes around teaching these values to both kids and adults. Creating programs and guides for schools on how to teach their young students about basic consent and how to get staff to take this shit seriously. Eliminate "boys will be boys." Destroy "he picks on you because he likes you."

I think that teaching these values will be incredibly beneficial to the world at large. So keep an eye out for updates about my upcoming non-profit. All I have to do is, you know, figure out how to make one and stuff. Adulthood!

Posted by Not Sorry Feminism at 1:06 PM