Toxic Masculinity: I Kind of Get It

I mean I get one aspect of it. Let me explain.

Toxic masculinity, of course, is the collection of destructive and self-destructive traits that our society demands men take on in order to be considered "real men." This includes approaching sex and romance as a mission of conquest, using violence to assert themselves, believing in a false and maladaptive dominance hierarchy, and never showing any hint of vulnerability or emotion.

Except for anger. Because anger leads to violence, dominance, and conquest.

The aspect of this that I have personal experience with is never showing emotion. It's not just about not showing it, either. The true goal is to not even feel it. Feelings like sadness, anxiety, grief, and even positive things like joy and wonder, leave you vulnerable. And it doesn't really work to only block out one emotion. It's really an all or nothing situation. Eventually your brain will automatically suppress any emotion it detects. The only one that can often get through is anger, because that emotional is not only powerful, it makes the person feel powerful.

I've touched on this before. The constant suppression of emotion caused a lot of festering and general misery. Most of the time I wasn't numb. I was anxious, because suppressing and hiding anxiety creates more of it. I was often filled with festering hatred and resentment. And that misery resulted in long-term, constant depression. 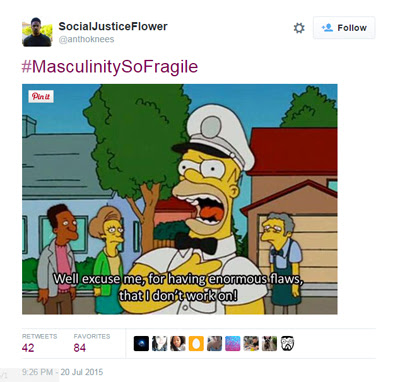 The point is that I do actually have sympathy for men trapped in toxic masculinity, even if a lot of the time I act like I don't. Men don't deserve sympathy and patience from women, but we tend to give it freely anyway.

Honestly, I know how difficult it is to break that terrible habit of suppressing all emotion. I haven't entirely broken it. I don't know if I ever will. But through pretty intense therapy, I'm beginning to really experience how incredible it is to be able to feel emotion deeply and fully. A lot of the time I feel like a plugged up drain. It's really like emotional constipation. It doesn't feel good at all and it causes problems in all kinds of other areas. The body needs to express emotion just as much as it needs to expel waste.

I see men struggle with this constantly. There's one particular individual I know who is letting an incredibly important aspect of his life fall apart because he can't deal with fear, sadness, and pain. He can't let himself be vulnerable. He has a lot of that stone face I remember seeing in the mirror so much when I was younger, and he displays a ton of avoidance behavior.

And I do feel sorry for him. I know that if he fails to submit himself to some similarly intense therapy, he will very likely suffer terrible loss and continue to experience a cycle of loss, because life in this world simply doesn't work if you can't feel and express your emotions properly. It taints every part of your life. It makes you miserable.

I firmly believe that many men suffer like this. And I firmly believe that this is the cause of so much of the violence in the world. There's no doubt that the ridiculous availability of guns in the U.S. continues to the appalling rate of mass shootings in this country. But I actually don't believe that gun control is the real answer. You know what else is different about the U.S. compared to nations like England, Norway, and Australia? Our adherence to the false ideal of masculinity, toxic masculinity, is so strong. Mix that with a fucked economy, undelivered promises, and media that instills that deadly male entitlement, and you have a cocktail that can't not end in violence.

This needs to be another aspect of my future campaigns. Eliminate toxic masculinity before it crawls into the hearts of young boys. That means attacking popular media. That's gonna be a huge job.
Posted by Not Sorry Feminism at 1:00 PM