When it came to the Daniel Holtzclaw case, it was one of those things where my brain couldn't fully accept the idea that he could be let off after what he did to all those women using his police power, but at the same time I knew there was a good chance he would be left off and if he had been, I would not have been the least bit surprised.

As it turns out, I did feel a bit of surprise. Not only was he found guilty, the jury recommended a sentence of 263 years in prison for the multiple accounts of sexual assault and rape. He will die in prison. This serial rapists will never rape another woman again.

I was surprised by the conviction because he targeted poor black women with criminal records. He did so, of course, because he knew that people care little for poor black women. He knew that other cops would probably ignore their reports and nobody would come to their defense if they even dared to report him. But they did. And the reports weren't ignored, even if this case got way less media attention than it deserved. It's not even trending on Facebook. Instead we have "Final Fantasy VII: Character Cloud Strife's Buster Sword Featured as Easter Egg in 'Just Cause 3.'" I love FFVII but GIANT WHO CARES, 13 WOMEN OR MORE WERE RAPED BY A POLICE OFFICER.

It's disgusting that the mainstream media is basically showing Daniel Holtzclaw that he was right, to an extent. People don't care about poor black women. If 13 white women had been raped, this would be all over the news. We can seem to gather up fucks about white women and about black men, but black women?

This is what I mean when I talk about intersecting spheres of oppression. Black women are so marginalized that most people can't seem to be bothered to care if they're targeted by a serial rapist who is also a fucking cop, using his power as a cop to extort and abuse them.

But at least justice has been done. As little justice as there can be in our broken, horrible justice system. But just to know that he's been punished about as much as you can be punished for rape is a beautiful thing and a victory for his victims and for black women everywhere.

And it's extra beautiful to see all the photos of him crying after the verdict and recommended sentence were handed down. 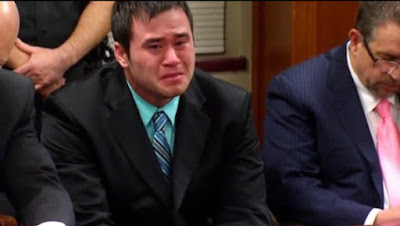 Cry forever, you shit excuse for a human being.
Posted by Not Sorry Feminism at 10:49 AM