I've had some of the best trolls lately. This is why I keep the comments section of my piece Men Do Not Experience Sexism open. MRAs and anti-feminists and other bitter men keep finding it and embarrassing themselves.

The first laugh of the day comes from user "ice dawg." 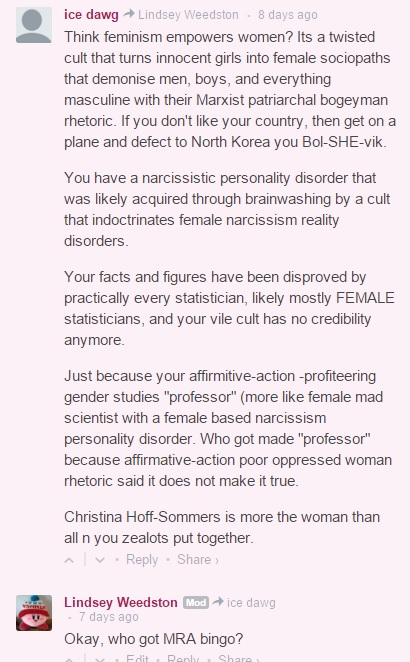 Bol-SHE-vik. Comedy gold. I need to write that one down for a future user name. I also love being told I have narcissistic personality disorder from dudes who pretend to be educated on anything related to any science. If you know anything about NPD and the first thing about me, you know how hilarious such an accusation is.

I also never took gender studies but if the professor had been a mad scientist, I would have taken it twice. Who wouldn't want to take a class taught by a mad scientists? Also what the hell is "female-based narcissism personality disorder? Does Captain Statistics not know that men are more likely to be diagnosed with NPD? 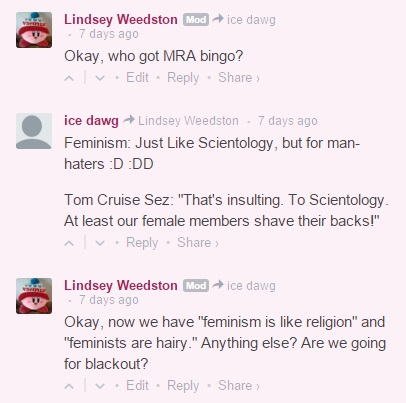 And he just keeps going! 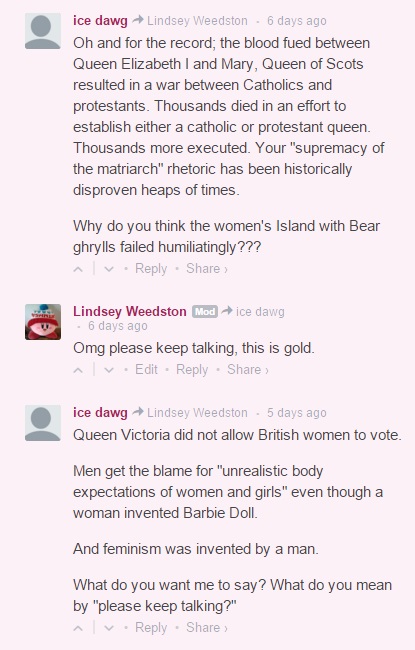 Ah yes, my supremacy of the matriarch rhetoric. Apparently my attempts at trolling dudes like this have been wildly successful.

This is all fucking gold. According to ice dawg, one war started by women that killed merely thousands of people is the same as the sum of all the other wars started by men in which hundreds of millions of people died, all the male dictators that have executed countless individuals, and the very fact that statistically and individually, men have been shown to be more violent than women in multiple scientific surveys and experiments.

But apparently, that science is nothing compared to one season of a reality TV show involving mostly white women on an island. I had to Google that to find out what it was because I'm not as well educated as ice dawg on the scientific discoveries of Bear Grylls.

As usual, an anti-feminist is entirely clueless about the concept of internalized misogyny as well. And apparently thinks that feminists consider all women to be perfect instead of trying to get across the idea that women are people. There are plenty of women who are anti-feminists. Christina Hoff-Sommers, for example. And plenty of women buy into and chase unrealistic beauty standards for women. This is still nothing in comparison to the centuries of men oppressing women across a vast number of cultures and men owning multi-billion dollar beauty industries that depend on making women hate themselves.

This is what anti-feminists do. They somehow think they can throw out single examples of women doing something bad as though that invalidates all of feminism. It so perfectly illustrates the way that anti-feminists think. They have this bizarre, twisted view of feminism that involves matriarchy and feminists thinking all women are perfect and all men are terrible. It makes it really easy to fuck with them. And so they go ridiculously out of their way to "prove" that women aren't perfect and it just makes them look like petty losers who hate women.

Then we feminists have to decide whether to simply point to all the atrocities men have committed which far, far outweigh things women have done or just to troll them until they're completely confused because they also have no sense of humor. 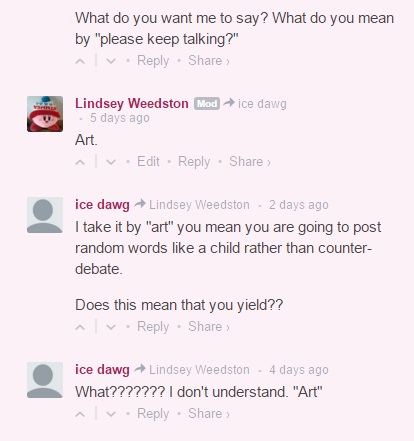 LMAO. Yes, ice dawg, I hath yielded to thine superior intellecte. And any of that was a debate and not just a lot of me laughing at you.

Seriously, though, this is a beautiful work of unintentional performance art.
Posted by Not Sorry Feminism at 1:00 PM