Last night on Tumblr, a post started going around containing a screenshot of a tweet from a young man that demonstrated some pretty rank rape apologia. See below: 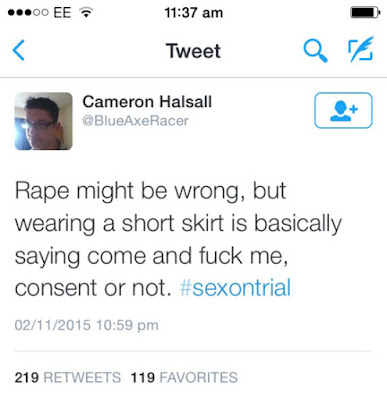 For whatever reason, Cameron thought it a good idea to post this on his personal Twitter account that contains his full name and photo. People have been trying to figure out the area he lives in and alert his parents and employer, and generally spreading the word so that A) women can know to stay the fuck away from him and B) he can suffer social consequences for his actions.

A lot of people apparently think it's wrong to make this guy, who said rape MIGHT be wrong, BUT, suffer any kind of punishment. They say he's being "harassed" and that we're going to ruin his life and oh no what if he falls into poverty from losing his job?

Anyway, I wrote a long response to this on Tumblr that I'm just going to copy-paste here because I have to go to work soon. Enjoy.

People saying I’m reblogging the screenshot of the guy who said rape is okay if short skirts are involved because I want “revenge” got me thinking of the reason I do get so upset over men saying shit like that and why I want them to be socially ostracized and, yes, fired. Anger is definitely involved, but this is not about revenge.

I’m a survivor of child abuse. I know how it feels to experience that level of pain and what feels like an infinite well of grief that somehow also feels empty, like there’s an essential piece of you that’s just missing. I also know what it’s like to grow up and live in a rape culture as a girl/woman. I don’t really know what it’s like to feel safe. It sounds nice, but I don’t think I’ve ever truly felt it.

As a result, I am fiercely protective of other women and girls. I’m protective of anyone who is vulnerable to abuse. Because I don’t want anyone else to feel like I do. Like I have. And, because I’ve been abused, I can spot abusers from a mile away. And let’s be honest. It’s not hard to spot rape apology. And that guy? Clear rape apologist. And it’s not that big of a step from engaging in rape apologia to raping someone. In fact, rapists spend a lot of time making excuses for their actions.

And even if that guy never rapes or sexually assaults anyone, he’s actively spreading narratives that fuel rape culture. Rapists are going to see that and think “yeah, see, that girl deserved what I did to her, and people agree with this, so it’s okay for me to keep raping people.” Probably not that explicitly, but people will take anything to heart that excuses shit they want to keep doing.

I know all of this. I see rape apologia and I see the future. I see all the people he will hurt and the people who will be hurt by people who read and agree with that tweet. And I feel the urgent, desperate need to stop it. To protect the people that these assholes will target. Partially because those future victims likely have already been raped and/or abused, because survivors are especially vulnerable to even more abuse. But also I don’t want more survivors to be created.

I just want the pain to stop. I want to protect people.

I also want a way better safety net/complete socialism for people who do get fired by employers who see the shitty awfulness they say on the Internet (even though I’ve been warned about that for many years but whatever) so they don’t plunge into poverty. But they should be fired. They should be ostracized. People should be protected from them and everyone else should know that there are consequences for that shit, and that society doesn’t tolerate pro-rape attitudes. Because that is what will end rape culture. That is the only way to end rape culture. And rape culture hurts so many. If a few white dudes lose jobs from that, I’m wiling to accept those causalities to protect people who really need protection from way worse pain than getting fired.

Posted by Not Sorry Feminism at 4:22 PM