A recent comment left on my blog by some extra pathetic troll was so satisfying that I have to share it with everyone. 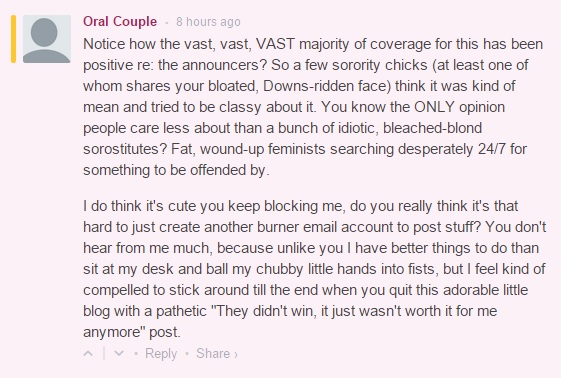 This was in response to my post about those male baseball announcers being boring and shitty about a group of women doing what was asked of them to support the team. Followed by the sorority being super classy when the bad press forced the network and the team to apologize to them.

I thought my taking a brief vacation might give anti-feminist trolls some hope. Hate (love) to break it to you, folks, but I missed blogging from vacation day one and I'm glad to be back, and I'll be blogging forever. I know you're watching, waiting, so desperate to see me stop, and that knowledge gives me so much satisfaction, I couldn't possibly stop blogging about feminism.

Here's my full response to this clown:

Are you trying to make yourself look bad? I ban IP addresses as well so you must be putting a lot of effort into harassing me if you're telling the truth. That's sad. And the Downs syndrome thing right after that inspirational post about the black girl with Downs syndrome? You really seem like you're just trying to make anti-feminists look as terrible as possible. You must be a feminist plant. A+, well done. Especially imitating how entrenched anti-feminists are in their own nasty corner of the Internet that they think the vast majority of coverage on the incident has been supporting the announcers.

And it's really helpful, because as anyone who knows anything about me knows, I'm fueled by trolls like this because I get revenge by doing the opposite of what assholes want. I'm gonna blog until the day I die, but by then the technology will exist to allow me to download by consciousness into a computer through which I will keep blogging about feminism even though my physical body is dead. Bye.

Posted by Not Sorry Feminism at 10:34 AM