Suffragette the Movie: No

I should have blogged about this weeks ago but as soon as I saw the posters for the movie "Suffragette" my brain went "nooooooooooooo NOOOOOOOOOOOOOOOOOOO."

It's covered in white women. 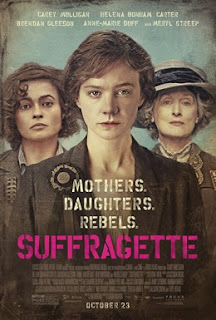 With all the national discussion about white feminism and whitewashing history, you'd think someone involved in this movie could have been like "Hold on, wait. Maybe we should address how much of a cracker fest this cast is."

Black women played a huge role in the suffrage movement and were totally snubbed by the white women we now credit with getting (white) women the right to vote. They were literally told to march in the back. And don't tell me it was different in Britain because it wasn't. Black women are always making things happen and then given no credit.

Come onnnnnn Meryl Streep. I expect better from you.

The LGBTQAIP+ community successfully boycotted Stonewall. I expect feminists to boycott and appropriately criticize Suffragette. Fellow white feminists, step the fuck up on this.
Posted by Not Sorry Feminism at 3:00 PM