Some college boy is super duper offended that he had to attend a class on consent because he thinks he doesn't "look like" a rapist.

For the record, he totally does. Look at this gross entitled white boy: 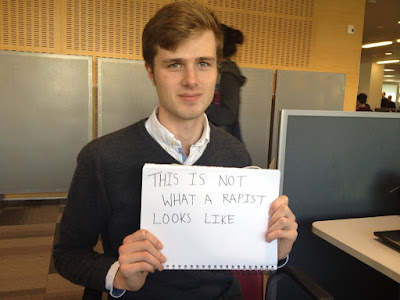 Seriously, this is the kid I would avoid at parties because he'd probably insult my intelligence for five minutes before trying to convince me to come back to his place just to see his giant collection of boring books by other entitled white guys when he's really going to try and coerce me into the bed while quoting bad white guy poetry.

But that's not the point. This kid never explains what a rapist does look like. Should we only require classes for the college boys wearing ski masks or openly playing with pill bottles full of roofies? Or is there another type of person who looks like a rapist? Please explain.

And how selfish do you have to be to whine and cry about having to attend a consent class when like a third of men will admit to being willing to rape women if you don't explicitly call it rape and one third of college women in the U.K. have been victims of sexual assault or unwanted sexual advances. You'd rather they not have a class at all and that shit just be allowed to continue? Obviously they can't profile people for imaginary rapist-like characteristics. So either all students have to attend or none.

Stop being a whiny entitled little boy and sit through the fucking class because it could very well prevent someone from raping someone else, you nasty piece of soggy week-old crumpet.

Posted by Not Sorry Feminism at 1:25 PM