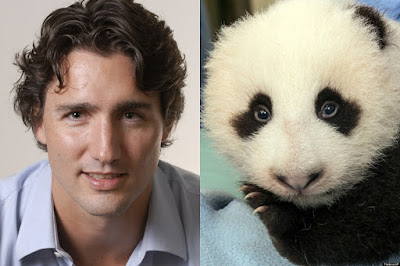 Wow! Yesterday, I mentioned the new Canadian Prime Minister calling himself a feminist and pointing out that GamerGate is shit, but he's done a crap load of other awesome things in his first few days as ruler of Canada.

The best of it being that he's reversed Harper's "meh, who cares" policy on all the missing indigenous women and girls of Canada and has launched an official nation-wide search for them. In his first four days! That panda is busy!

He's also "notified Obama that Canada will be pulling out of the bombing campaign in the middle east." Holy fuck! He's already standing up to the war-happy assholes of my government and sparing who knows how many women and girls death, injury, and sudden homelessness via random fucking bombs that mostly hit civilians!

Can Justin Trudeau be Prime Minister of the U.S., too? Or at least give some friendly advice and support to Bernie.

Information and quote pulled from someone who may or may not be Jesse Williams on the Internet.
Posted by Not Sorry Feminism at 1:00 PM