I stopped into a Halloween store recently to grab some Spirit Gum, and as always I had to take a look at the ridiculousness that is the difference between costumes for men and costumes for women. None of this is new but I took some terrible cell phone photos anyway. 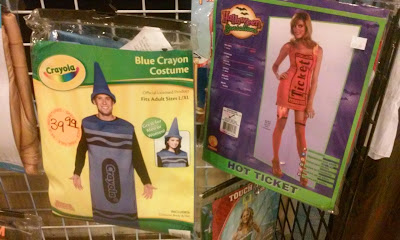 If you're a man, you can be a blue crayon! Haha! Human crayon! Oh and I guess if you're a woman you can also be a crayon, whatever, this isn't your costume section but whateverrrr....

And wouldn't you rather be a "Hot Ticket"?? I mean, if you're a woman, and you're going to be an object for Halloween, then you should REALLY be an object, right? Ridiculous high heels not included. 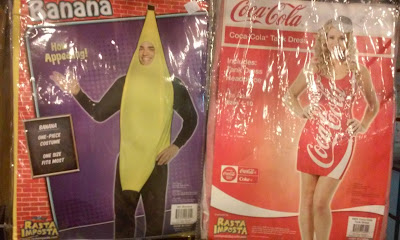 If you're a man, you can be a banana! How silly, being a banana. Wear black pants and a long-sleeved shirt for comfort and warmth! If you're a woman, you can wear a very short dress that says Coca Cola on it! No pants or shirt for you. 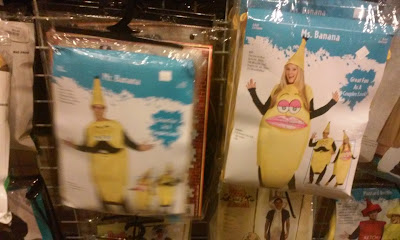 I also found plenty of racist costumes, but was relieved to not find any costumes mocking trans women. The horrifically transmisogynistic Caitlyn Jenner costume is apparently a Spirit Halloween exclusive! Which is why I will never shop there again.

While I was in the Halloween Outlet Store, as it was called, another woman came in. As I was looking through the 99 cent bin, because why not, the lone store employee took her over to the women's costume section. After a second or two, I heard her say "I work with children."

Another pause, some mumbling from the male employee, and then: "I work with children."

My first though was to wonder whether she'd ever been in a shitty costume shop before. This is how it's always been. How could any woman be surprised to find that every costume actually marketed toward women is ridiculously sexualized?

My next thought was that maybe she was completely aware of the fact that this is how it is, and gets her kicks by going into every shitty costume shop she can find, getting a male employee to show her the women's costumes, and watch them mutter and fumble and turn red under the harsh light of the reality that is systemic, marketed misogyny.

If that's the case, then that mysterious woman is my hero.
Posted by Not Sorry Feminism at 2:00 PM