That Time I Found Rape Culture On a Shampoo Bottle

So I was in the shower the other day, having shower thoughts, and I decided to check my boyfriend's Old Spice body wash bottle to see if it had similar ingredients to my own fruity-smelling "woman's" body wash.

As it turns out, they start much the same but my body wash does have a number of fruit extracts and crap in it. Anyway, after that, I glanced up at the rest of the reading material on the bottle and found some rather hilarious content. Apparently, in order to get men to use body wash, you have to convince them that doing so is TOTALLY MANLY.

First of all, this is called "Swagger" body wash. Okay.

Swagger (TM) body wash from Old Spice is for the man who holds the complete works of Aristotle in one hand, and a delicious sandwich in the other. Swagger's subtle scent transforms your skin to feel like smooth and hydrated playing field where confidence scores the winning touchdown.


Who writes this crap? They just took three things that are considered manly to surround the actual useful information ("smooth and hydrated"), I guess in a desperate attempt to cradle the male ego, which is so fragile that the word "hydrated" could shatter it. So they have to go "PHILOSOPHY. SANDWICH. FOOTBALL." Hilarious. 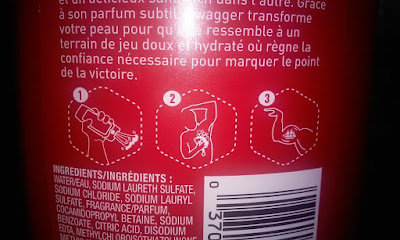 1. CRUSH THE BOTTLE IN YOUR MANLY HANDS. 2. Wash yourself. 3. NOW YOUR BICEPS HAVE BOATS ON THEM??

After that laugh, I picked up my boyfriend's Old Spice 2 in 1 shampoo and body wash to laugh at what was on the back of that.

It started out just as funny. This one was separated into three sections, each with completely unnecessary hyper-masculine themes crammed in.


Hahaha! Oh, Old Spice, that is ridiculous. The gel stuff inside the bottle can't wail on anything. It's liquid and has no agency of its own.

CLEANSING LATHER: Does its job, then drives away in a sports car.


How absurd! 2 in 1 body wash/shampoo can't drive any type of car.

CLEAN CRISP SCENT: Forces your body to smell great, even when it doesn't want to.

So among the list of manly things to be crammed onto the back of this bottle, we have sports cars, wailing on pecs, and FORCING A BODY TO DO SOMETHING IT DOESN'T WANT TO DO. 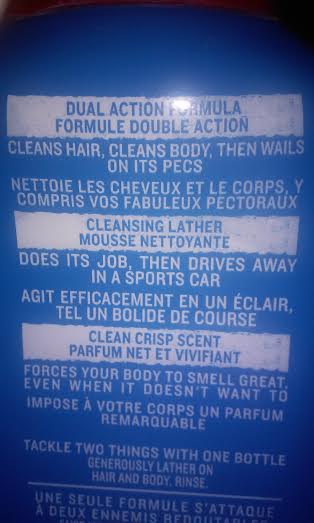 Pecs, cars, rape. These are the things Old Spice considers to be manly.

That is not what I was expecting from a 2 in 1 body wash/shampoo bottle. Just goes to show you that rape culture is everywhere, and this is why men rape so much. Thanks, Old Spice.
Posted by Not Sorry Feminism at 3:00 PM