Fuck You Too, Hideo Kojima

This is a thing that happened like 2 days before I went on vacation and it pissed me off so bad that I couldn't even find the words to write about it yet on here so you get to read about it now.

I haven't played any Metal Gear games since the original Metal Gear Solid because, despite being generally fun and possibly sparking a life-long love of stealth games, the plot, writing, and voice acting were all over-dramatic, over-complicated and fucking ridiculous and it's apparently only gotten worse since. That may be fine for some people but over-dramatic-ness is a huge pet peeve of mine.

I also did not appreciate the constant shoehorned romantic subplots and the fact that Sniper Wolf's jacket was zipped almost all the way down with no shirt underneath even though it was rather snowy outside. Yes, I've been noticing sexualization for that long.

We're now at Metal Gear Solid V, and, as I've said, everything has gotten worse. Here's the female character "Quiet" in her standard outfit: 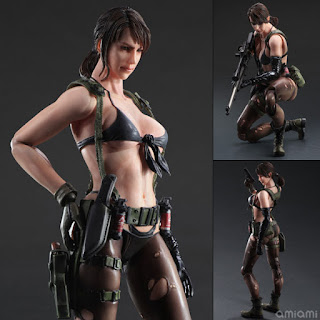 If you're also a feminist gamer, then you probably just rolled your eyes so hard that it hurt a little, but are also not even the slightest bit surprised. Sexualization of female video game characters is nothing new. In fact, it's so old it's basically retro.

I never would have said anything about this character because saying the same thing over and over is boring. But the series creator and ongoing writer, director, and producer had to spit directly in my face by trying to counter criticism of one of the more ridiculously ineffective tactical soldier outfits I've ever seen by giving the most terrible excuse for a ridiculously ineffective tactical soldier outfit I've ever seen.

This is the reason for Quiet's outfit:

The reason Quiet wears that bikini outfit is that she breathes through her skin, using photosynthesis to absorb air, water, and nutrients. She has to do this because her body is infested with parasites.

At the beginning of the game, the villain Skull Face sends his soldier Quiet — in standard military fatigues — to assassinate Snake. She fails. Snake’s hospital roommate, Ishmael, manages to set her on fire, and she falls screaming from the hospital window. As we find out later, Skull Face was able to save her life by infecting her body with magical parasites that both give her special abilities and turn her into a bioweapon.

Parasites — the new nanomachines! — are a key part of the plot in Metal Gear Solid V, and I won’t go too much into detail here, but to sum it up: Because of these parasites, Quiet can’t speak in English, and she can’t wear normal clothing. During one scene later in the game, soldiers have forced her to put clothes over her bikini, and you see her come close to suffocating.

I feel personally insulted. Not only is this a terrible excuse plagued with more plot holes than, well, your average Metal Gear game, they put so much effort into this bullshit. They wrote up backstory and rendered cut scenes to support the biggest video game-related lie since "GamerGate is about ethics in gaming journalism."

No. She is not dressed like that because she had to be injected with parasites that turned her into a plant person. She is dressed like that so straight male gamers can gawk at her. End of story. Don't lie to my fucking face. By concocting this ridiculous excuse, you're telling me that you think I'm incredibly gullible and that you have absolutely no respect for me. I'd be less offended if Hideo Kojima personally came to my home and pissed on my foot.

I'd assume that this flimsier-than-Quiet's-bikini-top excuse was actually for male gamers who were on the fence about buying Metal Gear Solid V because of the tiny bit of guilt and shame at wanting a game that was committing such clear and gratuitous sexualization. They knew supporting such a game was wrong, but only needed any lie they could get their hands on to justify the purchase, no matter how transparently bad the lie was. Then they could go "oh it's central to the plot!" and hand their money over, guilt-free, pretending it's not the most obvious bullshit in the universe.


(Cont) But once you recognize the secret reason for her exposure, you will feel ashamed of your words & deeds.
— HIDEO_KOJIMA (@HIDEO_KOJIMA_EN) September 7, 2013


Apparently Hideo Kojima himself thinks so little of feminists and general critics of gross sexualization that he thinks we'd buy that bullshit and "feel ashamed." You know, of our words and deeds.

Instead, he made things 50,000 times worse. Did he really not think we'd ask why, if she needs to breathe through her skin, she wears tights at all? If the tights are breathable, why are they covered in holes? Why even bother wearing a bikini that couldn't hold Quiet's boobs in if she went on a brisk walk? Why not just nipple pasties? Why the one superfluously long glove? Why not shave her head? What is the purpose of having her do a bunch of stretches in one part of the game that show off her ass and cleavage in something that you would see in softcore porn? Why did the one person in the world who was turned into a plant person via the injection of the most convenient parasites ever happen to be an attractive, thin white woman with perfect tits?

I'd really prefer you just be honest with me, Kojima. Don't pretend you have integrity in this matter. Just admit that you wanted to make as much money as possible and you don't care how much damage you to do women in the quest for buttloads of cash. Or just spit in my face. Either way would make me less angry than your condescending bullshit excuse that insults the mind of every woman and every decent human being in general.

If you can't do that, then:

Posted by Not Sorry Feminism at 1:30 PM