One thing that happened while I was on vacation is that Anita Sarkeesian and Zoe Quinn testified to the fucking UN about the vicious online harassment of women. 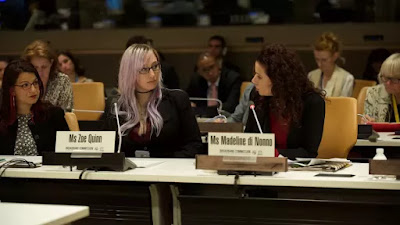 [Trigger warning for the usual ableism] We Hunted the Mammoth has compiled a fun list of the most ridiculous conspiracy theories, calls for revolution, delusions of grandeur, and general crying by these extremely mad gamers. They seriously fancy themselves a benevolent force of freedom fighters standing alone against the monstrous tide of oppression brought down upon them by feminists requesting better representation of women and other oppressed groups in media.

Their lambasting against the UN gives further credibility to my belied that GamerGate is the Tea Party of geek culture. The Tea Party started because a bunch of racists got really mad that a black guy was elected President. GamerGate started because a bunch of misogynists got mad that Zoe Quinn cheated on her boyfriend. They're both super fond of conspiracy theories involving things like birth certificates, Sharia law, and cabals of video game websites conspiring to trick them into buying poor quality video games.

They both fancy themselves stalwart defenders of what is in actuality a status quo that gives them unfair advantages over others. They're terrified of the unflinching and inevitable tide of progress. Their actions forced the general population to recognize how bad the situation really is because yes, people like this really exist, and so inspired them to take action against these bigots. Now we have Bernie Sanders as a viable political candidate and Anita and Zoe have spoken to the UN. Meanwhile, both the Tea Party and GamerGate have faded from memory as their screeching becomes white noise to increasingly disinterested ears.

Unfortunately, the Tea Party continues to cause problems as their candidates in the House and Senate try to force government shutdowns that can cause irreparable harm to the poor, and GamerGate.... um... well they got some video game publications to change policies on something or other but they're pretty much just restricted to harassing people online now. Maybe comparing them to the Tea Party is giving GamerGate too much credit.
Posted by Not Sorry Feminism at 12:47 PM