Men Are Afraid of Women 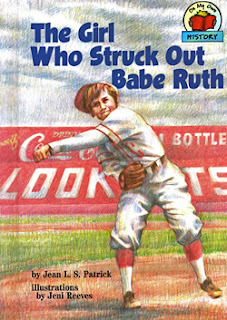 Speaking of sports, did you know that a woman struck out both Babe Ruth and Lou Gehrig? Actually, she was a 17-year-old girl. They brought her out in a real game against the Yankees. Apparently, she was even pitching on a sore arm. But she struck out Babe Ruth in three pitches, and the man threw down his bat and stomped off like a child. Lou Gehrig met with the same fate. Her name was Jackie Mitchell.

Days later, the owner of her team voided her contract because he decided that the sport was "too strenuous" for women.

But based on the fact that she embarrassed two grown men with ease, the truth is clear. Women's excellence is too strenuous for the male ego. They have to repeat to themselves over and over that they must be better at sports than women, because if they aren't, what will become of their frail masculinity?

That's probably why men don't watch women's sports. That's why they don't pay them nearly as much and why they make them play in shit conditions. They're afraid to realize the cold hard fact that plenty of women are better than plenty of men at any and every sport.

If they don't have sports, what do men have left to help them pretend that men are superior to women?
Posted by Not Sorry Feminism at 1:00 PM