So I tried out a little experiment the other day after the whole #GiveYourMoneyToWomen thing. Inspired, I decided to demand compensation for my work from one of those boring dudes who like to go on feminist blogs and write out boring essays using boring, already-refuted-a-thousand-times-by-a-thousand-different-feminist arguments like "but men have to sign up for the draft how sad for us that we created that and refused to let women even join for hundreds of years." And we're expected to respond as though they're worth our time, or else we're not participating in discussion and are just unreasonable man-haters that won't listen to "logic."

I responded once, and then when he came back at me with yet another essay instead of listening or actually doing his own research, I responded with this:

"As for the rest, your Not Sorry Feminism Free Trial has ended. For further education, please make a donation under your name to my Patreon account or directly to my Paypal."

You can find it under the "Joss Whedon: King of Bad Allies" post, or, in case he goes and deletes his comment, here: 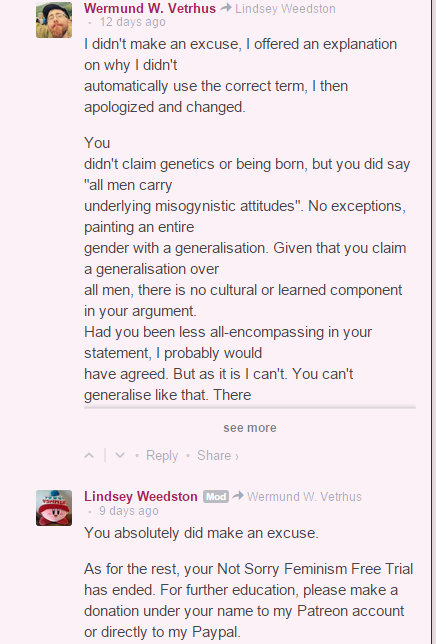 No donation, but something even better happened. He left me the fuck alone. I've found an antidote to the boring "pretend to be invested in a real argument" troll. Demand payment for his education. Watch him vanish.

This is fucking groundbreaking, people.
Posted by Not Sorry Feminism at 3:40 PM

I've seen a few women do this on Twitter, basically demand payment if you're gonna waste her time. It is a remarkably effective tactic, and the mantrums the dudes throw after being blocked for non-payment to put up with are entertaining as hell if you can stomach gender slurs and ableisms.

lol this blog is hilarious.


"Rich white girl complains about everything, film at 11"