As the Baltimore Uprising continues, I see article after article calling for white people to shut the fuck up, stop calling black people thugs, and have some goddamn empathy for them. Yet so many of these articles seem to have the irresistible urge to soften the blow by pointing out that the author does not condone violence or criminal behavior.

People, especially liberal white people, have been spouting off shit like this recently like it's going out of style. They say it like it's some fundamental truth, but when you really look into it and examine these apparently pacifist attitudes, they fall apart pretty quickly.

First of all, crime. Is committing a crime always wrong? What if the law is unjust? Consider how many of these white liberals have smoked weed in places where it wasn't legal. How many Seattle liberals have gone to Bumbershoot and smoked weed in public in full contempt of the cops who stand around and did nothing about it? Even back before it was legalized, when it was still considered a Schedule 1 narcotic? Were you doing something wrong, or was the law unjust?

But of course, you weren't damaging any property, right? Other than coating it with weed stink, no one's property was hurt. Okay, what about the tearing down of the Berlin Wall? That shit was government property. Do you think President Reagan was wrong when he said "Mr. Gorbachev, tear down this wall"? Do you think the oppressed people in Germany were wrong to tear it apart? The government spent a lot of money on that wall. What about the Boston Tea Party? Were the colonists wrong to hurt the merchants who had spent money to order that tea by throwing it into the bay? 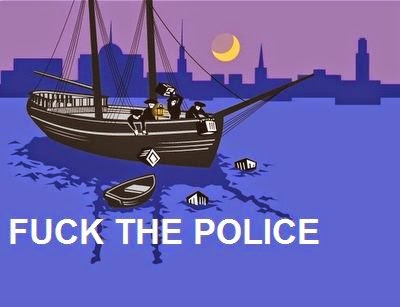 Did you know that during the American Civil War, the Union Army used organized tactics of massive property destruction, including burning down entire plantations and food storage so that people would starve, in order to win? That without that, they probably would have lost? Talk about violence.

And what about straight up physical violence from person to person? Do you oppose every war in existence? Should we have used non-violent action against the Nazis? What about self defense? How many black kids have to die before a riot is considered self-defense? Nothing else has worked. People pushed to a certain point will revolt. The U.S. colonists did it for much less than black people in this country have endured, but nobody condemns them.

If you're going to be a pacifist, a "violence never solved anything" person, you have to go all the way. Otherwise, you're just a hypocrite.

And FYI, even the Quakers support the Baltimore protesters, so.

Posted by Not Sorry Feminism at 1:50 PM

"Okay, what about the tearing down of the Berlin Wall? That shit was government property. Do you think President Reagan was wrong when he said "Mr. Gorbachev, tear down this wall"? Do you think the oppressed people in Germany were wrong to tear it apart?"

East Germans weren't particularly oppressed, Reagan's Cold War hawkishness led to one of the greatest humanitarian disasters of the last century, and in the last analysis East Germany stood for ideals that were higher and better than the west.

Are you serious right now? I'm no capitalist and I hate Reagan, but that wall was keeping families apart. It needed to come the fuck down.

Are you actually serious? Cripes.