Silencing is an Oppressive Tactic. GamerGate Wants Us Silent.

People in the U.S. like to bring up the First Amendment to the Constitution - freedom of speech - a lot. Many people consider it to be our most important right. Many more are so attached to it that they try and generalize an amendment that only applies to the government and apply it to anyone who criticizes anyone else. You know, assholes are ALLOWED to say horrible shit because FREEEEDOOOOOOOOOOM.

I know we're all tired of that.

Yet the same free speech advocates are curiously silent when people are saying things they don't like. People like women speaking out against misogyny in media. Women who face far more than simple criticism. Women who face deluges of comments on every tweet they post demanding "proof" for every simple experience of harassment, when stalking someone on Twitter to demand they prove every little thing and demand debate and post boring, shit "arguments" that have no basis in reality over and over and over - all this IS harassment. Many of these people do so from new Twitter accounts that have almost zero followers and were clearly created with the express purpose of hounding a couple chosen targets.

This constant demand for attention in the midst of dozens of others doing the same is either profound narcissism or deliberate harassment, meant to wear down and demoralize the target. They can call it "discourse" until they're blue in the face, but the rest of us see it for what it is. There is no "discourse" in saying that Anita Sarkeesian is "damseling herself" by speaking out about the harassment she receives.

This is not a joke.

@femfreq Are you not embarrassed that you are a Damsel in Distress in the media? You have become the very thing you seek to destroy. How sad
— Technocrat (@brofreq) February 1, 2015


@brofreq @femfreq Haha. that is quite the irony. HeforShe, women are constantly damseling themselves, seems realistic to me.
— Charlie Marno (@thesledgetobias) February 1, 2015


And you can also see how "brofreq" is clearly an account made to harass Anita, "femfreq." Not that they would ever admit that.

And yet, this is still the least of the harassment women like Anita get. They also frequently get death threats and rape threats. There are two ways that misogynists deal with this fact. They either go for obstinate denial, demanding "proof" for every single threat even though you can easily find huge lists of screenshots of threats with a simple Google search, or you could just search Twitter.

Feminists are the worst people to ever walk this earth. I'm gonna rape all of them @femfreq
— paranoia vedi (@Vedi47) February 25, 2015


When they can no longer do that, because, well, LOOK, they go for the silencing tactic. Either they decide that none of the threats are "credible," despite that the word "credible" is essentially meaningless in the new culture of harassment that has arisen online so quickly that law enforcement has no real and certainly no effective way to deal with it, so obviously just SHUT UP because they're not REAL threats. Of course, there's no way to know if an online threat is real until the person who sent the threat takes action. So basically, someone has to be assaulted or die before these misogynists will be like "yeah okay, that threat was credible." Real helpful.

Or they simply tell women to be silent about it. They say that we should report the threats to the police and then keep quiet. I've been given this terrible advice over and over and over by supporters of GamerGate,

@ButtStallion @femfreq That's not my point but yes, report it to the proper authorities, don't spread it over the net, only welcomes trolls
— Technocrat (@brofreq) February 1, 2015


@ButtStallion @brofreq when she gets threats every one has to know it? Go to the police and be quiet about it!!!
— SolocovGE (@Felixv9) February 2, 2015


@ButtStallion @brofreq @femfreq She should report credible threats to the police and stay quiet so they can get the drop on the person.
— Eyg Umpire (@TheMonsterRDue) February 19, 2015


@ButtStallion By whining about it, the victim encourages more trolling. Just report them and be done with it. Advice for your own good.
— Randy D. Harpoonist (@InternetPlebian) February 26, 2015


This in spite of the fact that any time any random person says anything that can be sort of construed as a threat, all of Twitter has to know about it. They speak the hell up about those "threats." Seriously.

But when Anita Sarkeesian or Zoe Quinn or Brianna Wu speak out about the threats they get, they're "victimizing themselves" or "feeding the trolls" and they should all shut up and let the police take care of it, because that's what the police say to do! And we all know how effective the police have been about taking care of people who threaten and harass people online, right? How many people have been arrested for it? One? Two? In Britain?

This is an actual conversation I had: 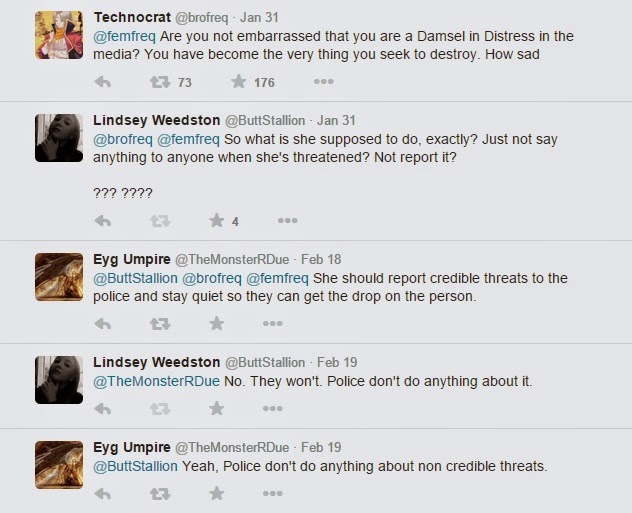 So, basically, stay quiet and report to the police, who we know won't do anything about it, so nothing happens and everything stays the same. We can keep harassing you with impunity until you're either actually attacked or run out of steam and do what we want, which is to fall silent altogether.

The message from GamerGate to any women who don't agree with them about every single thing is "be silent." This is what GamerGate is about, and what unaffiliated misogynist gamers have been about for a long time before they were able to unite under the rape joke GamerGate colors.

They're the same people who cling so desperately to their misuse of the First Amendment whenever some YouTube asshole they like gets criticized, or a developer they like is criticized for saying something incredibly misogynistic or racist, or they're told to stop fucking harassing people. But when women use their First Amendment rights to speak out about the harassment they receive? "Be silent." 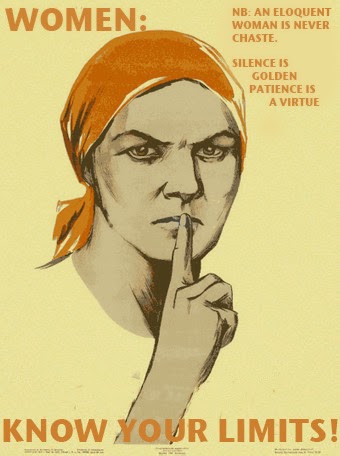 It's an ancient oppressive tactic, silencing. Silencing comes in many forms, but it all has the same purpose - to maintain the status quo. We all know that talking about a problem is the only way to solve it. Please give me a single example of when any societal problem has been solved or reduced with silence. You can't come up with action without communication and discussion, can you? Reporting the problem to the police when the police do nothing is not a solution. And the only way we can come up with legislation that allows (more like forces) the police to act in an effective manner is to TALK ABOUT THE PROBLEM. You have to raise awareness about it so that enough people will be motivated to take action, then you have to come up with an action, and then people have to use their voices collectively to support that action so that it can be effective.

You all love your shiny new net neutrality, right? You think you would have gotten that if you'd all sat there silently and just let the FCC take care of it? That's a laughable thought, right? About as amusing as is the idea that police will do anything about online harassers without us tirelessly demanding that something be done. Without us getting the attention of the media that spreads the message to the wider population so that they can support us so that politicians will realize it's a popular issue and actually pay attention and do something. That's how shit works.

They want us to be silent. Just like the oppressive forces before them.

The First Amendment was created, and created first, because our founders (shitty as they were) understood how dangerous and effective oppressive silencing is. They wanted to allow US citizens to be able to speak out against the government without fear of being imprisoned, persecuted, or harassed by government authorities. Because silencing through harassment is oppressive. Empires and religions have done it for millennia to maintain their power, and today, the privileged continue to use these tactics to maintain their privilege, which gives them power over others.

People everywhere, including GamerGaters, condemn the censoring of the Internet by those in power. Yet they participate in this insidious attempt to censor and generally silence women. Hypocritical, to say the least. But mostly, it's yet more evidence that GamerGate is nothing more than an oppressive force, spearheaded and led by the privileged in an attempt to maintain their power over others.

GamerGate wants us to be silent. What more do you need to know?
Posted by Not Sorry Feminism at 10:42 AM

"anything about NON credible threats"