For those of you who don't know, when I refer to "anti-SJs," I'm talking about the people who claim to be against "SJWs," which is short for Social Justice Warriors. This title, awesome as it sounds, was created to be a derogatory term for anyone against racism, misogyny, transphobia, fat hatred, homophobia, ableism, etc. They call themselves anti-SJWs but I shorten that to anti-SJs because they're not against individuals as they claim, but are clearly against social justice as a whole.

These are the people who, as soon as you begin to talk about ableism, will jump in to claim that ableism is a "made up word" (as opposed to the words that grow on trees or are hand-picked by Zeus or something) and doesn't exist, and is just some "SJW bullshit." Same goes for when you try to talk about microaggressions, or discrimination against fat people, or anything that doesn't fit into their narrow definition of oppression which only applies to the most overt shit in the universe, maybe.

Anyway, there's a new trend of mocking the kind of shit these anti-sj people say, which includes accusing us of the most bizarre shit. I'm finding it to be most enjoyable. 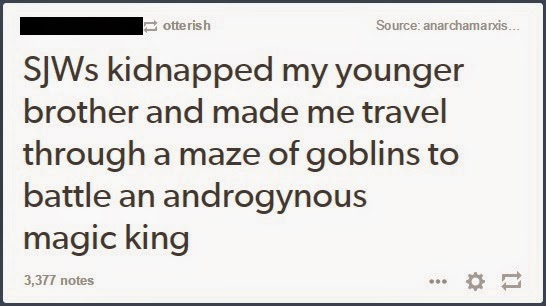 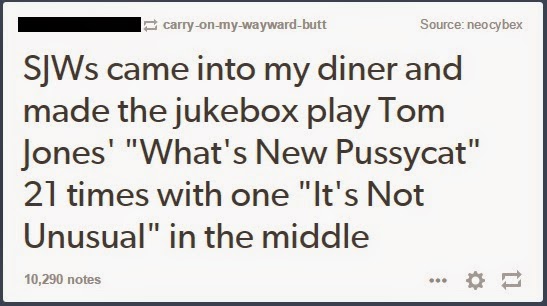 Two of those don't even make sense but I love them even more.
Posted by Not Sorry Feminism at 1:25 PM