I go on and off with GamerGate. I know I made a post a while ago saying that I would stop talking about it, but I was still under the illusion that it would go away. But GamerGate is a haven for trolls and bigots, and if I've learned anything in my time, it's that these people don't just go away. They fester and find ways to feed themselves, guffawing among their own kind at imagined victories.

They have to be fought. Their bullshit must be exposed until the general public refuses to tolerate them anymore. So here I go.

GamerGaters use the idea of "ethics" in gaming journalism as a shield (yes I am using that word intentionally) to hide the underlying and thinly veiled bigotry and hate that lies beneath. Any passing observer can see after two seconds that this is a lie, yet they cling to it in order to stave off criticism.

"It's not about women," says the GamerGater. Yet their own kind will openly admit that it indeed started with Zoe Quinn. AND it's general knowledge by now that the very term was started by Adam Baldwin while he was for some reason going off about what happened between Zoe and her horrible ex. He wanted to frame the whole thing as a scandal worthy of comparison to Watergate, which uuuuggghhhhhhhhhhhhhhhhh forever.

Once you demonstrate that you have this knowledge, GamerGaters drop that shield and go straight to defending the horrific harassment of Zoe Quinn and their whole shit "movement" by trying to push the tired point that she slept with men to get good press. Of course, only one of the dudes she allegedly slept with is a journalist. And he only mentioned her game in one single article months before the alleged sex. Still, they're desperate to try and prove that the two had a relationship before the article came out.

A recent article claims the following:

Stephen Totilo, Editor in Chief of Kotaku, claimed to have conducted an investigation, and stated that the relationship between Grayson and the developer, Zoe Quinn, began after he covered her game (an assertion that has since been disproven.)


There's a link embedded in those last words that takes you to some Wordpress site that is apparently supposed to "disprove" the idea that Zoe and Nathan started a relationship after the article was published.

What's contained in that link is a timeline of events going backwards from when their relationship started:


April 2014 The time frame that Grayson claims to have begun a romantic relationship with Quinn.

3/31/2014 Nathan Grayson briefly mentions Zoe Quinn in an article covering Game_Jam. In the first sentence of the second paragraph, Grayson links to a related blog post by Quinn, which was published earlier that day.

*While several brief conversations took place on Twitter alone between the two, none were nearly as interesting as this one. So I’m not going to flood you with them.* 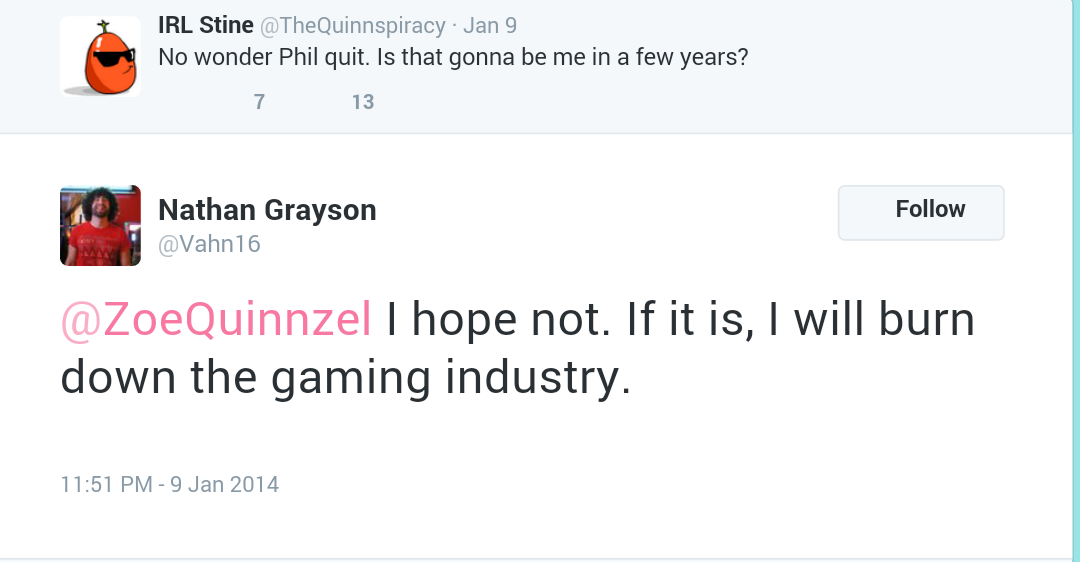 1/8/2014 Grayson gives positive coverage to Quinn’s game, Depression Quest, in an RPS article covering Steam’s greenlight of 50 games. Compiled of mostly a list, Depression Quest was singled out from the list (alongside 2 other games), referred to as “standout” and “powerful Twine darling,” and a screenshot of the game was used as the header picture for the article itself.

2/18/2013 Grayson thanked in the credits of Zoe Quinn’s game, as exposed by The Ralph Retort in this article


This is their "proof" that Zoe and Nathan Grayson got together before he complimented her game in an article. A tweet the day after the article came out that states a desire to do something that I feel like doing every other day, and a tiny credit to Nathan among a list of other people credited for testing the game before it came out.

Somehow, this is supposed to be proof of a romantic or sexual relationship.

Could you reach any harder? Stop, GamerGaters, your arms are going to fall off at this rate!

If GamerGaters are so concerned about "ethics," then they need to take a good hard look at themselves. I find shit like this all the time. If you dig into anything that GamerGaters try to call "proof," it only takes 30 seconds or less to find that it's all bullshit and conjecture. If they want to wipe out dishonesty in the gaming industry, they need to take a good long look in the mirror. Every GamerGater I've had any kind of argument with is dishonest at best, and usually with clear signs of deep misogyny, racism, and other types of bigotry. Especially ableism.

GamerGaters have no ethics themselves. They link you to shit they call "proof" hoping you won't actually read it (or watch it, they love to send super long videos), but if you do, you soon see that they're being super misleading or just outright lying to your face.

Funny, I find the same thing with MRAs all the time.

Maybe I'll gather all the evidence I have for this lack of ethics among GamerGate and start #GamerGateGate. It's about ethics in the movement about ethics in gaming journalism.

Posted by Not Sorry Feminism at 3:01 PM

Even if I weren't sympathetic to the left, I'd have a hard time joining GG, KIA, MRAs or whatever acronym.

Even as a conspiracy theory, it is incredibly amorphous and flimsy.. a massive "NO YOU" transferring the valid issues of feminists onto middle-class cismen. The vast majority of whom have never even been TOUCHED by sexism or censorship in their lives. And they tell me I've got a bleeding heart?