The Politics of Choice in the Gender Wage Gap

In those hilarious moments where men try to argue with me about the gender wage gap (hilarious because I'm so experienced in this particular debate that they never stand a chance), one thing that always manages to come out of their misogynistic mouths is the idea that women "choose" lower paying work.

It reveals just how basic and shallow their thinking is. They haven't even bothered to consider what comes into making any kind of choice. They haven't thought about the fact that every choice is a sum of experiences, socialization, various influences that start at infancy, plus all the real and perceived consequences of either choice, which are also influenced by the previously mentioned factored plus the values of the society one lives in. There are countless factors to be considered.

For example, women tend to "choose" jobs like teaching and social work over construction work and jobs in STEM fields. Misogynists will be quick to point this out. But why? Unless you're misogynistic and shitty enough to believe that women are just born without and interest in math and science or a capacity for construction jobs, this is a question that warrants a lot of thought.

Hardcore misogynists, of which I've met plenty, will say that women just want the easy work. They choose the easy jobs because they're lazy and/or spoiled and are now demanding more money for it. Clearly, none of these assholes has worked a single day as a school teacher, who often work 80 hours per week yet are paid for only 40, so that they can effectively grade work and create a lesson plan that might actually benefit the kids. Anyway.

So if you're not a total misogynist piece of shit, you have to look deeper. Why don't women pursue jobs in construction more often? Well, let me use myself as an example. I'm an average-sized woman who does not appear to be especially strong, and generally possesses facial and body traits that are traditionally considered "feminine" by our gender-obsessed, cissexist society. I have been in situations in which I must look for any decent paying work available. I was in this situation just a few weeks ago. Surfing Craigslist, I came upon ads for construction jobs and similar work traditionally considered to be for men. And yes, I dismissed the possibility of applying, often with a sigh. 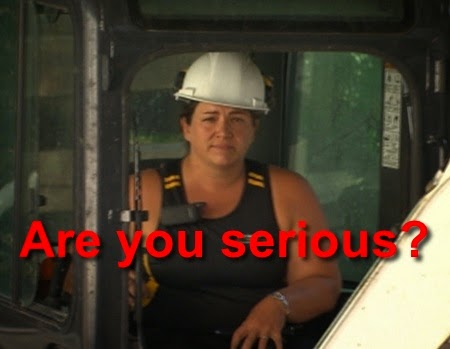 Actually, I was deliberately looking for work that would keep me active and give me plenty of physical exercise, because I think it would spur my creativity at home. And, you know, exercise is good for you, but I hate doing it in my free time when I could be writing or re-playing Dragon Age games. But I passed up construction work. Why? Because I don't think they would ever consider me. I think it would be a waste of time to even fill out an application or write a cover letter when it's signed with my clearly traditionally feminine name. Even if I did get an interview, do you think there's any chance that they would consider hiring me once they laid eyes upon my average-for-a-cis-woman frame? It's hard to imagine they would, when even in liberal Western Washington it's rare to see a woman in a construction hat.

And let's say that by some miracle they did give me a chance. Maybe I could prove my strength to them by lifting 100 lbs. in one go, even though with all the construction equipment, it probably wouldn't be necessary for me to be able to do so. What do I have to look forward to then? I 100% expect to have to deal with sexual harassment, or at the very least, have to endure sexist jokes and other gross bullshit. And I'm not assuming this out of nowhere. I know someone through my boyfriend who is a construction worker, and the stories I've heard about him, the things he says and the jokes he makes, confirm this stereotype of construction workers.

Again, this is in the liberal Seattle area. A guy in my own liberal, progressive circle.

Am I really supposed to expect that I would be welcome in this environment? That I would be comfortable? That I would feel emotionally safe? I don't care about the physical danger involved. I'm not afraid of heights and, hell, I've been a delivery driver more than once. And according to a study by the US Bureau of Labor Statistics, that's a whole four places higher on the list of most dangerous jobs than a construction worker.

I don't avoid construction work because of the danger involved, nor because I'm lazy. If you want to talk grueling work, by the way, let's talk about waitresses who have to carry huge food trays of food all day 8 hours a day or more for less than minimum wage. My grandmother was a waitress for many years and was strong as shit because of it. She didn't get to stand around looking at holes in the ground or sit in earth movers. She was constantly running around, trying to please the endless line of greedy and needy assholes so that she could earn enough tips to raise my mother by herself.

Seriously, guys, try doing that shit for even a day.

I make my choice because I understand our society, I'm aware of the rampant sexism in the construction industry, I don't see my gender represented at all in the industry, and because of this I can expect to be either immediately rejected for my gender or harassed if I somehow do get hired.

Why should I bother? Who would choose that?

Yeah, I would rather make less money as an office assistant than have to feel unwelcome every day at work and be constantly sexually harassed and have to deal with misogynistic, homophobic, transphobic and racist jokes on a daily basis, knowing that things will only get much worse for me if I try to make that shit stop.

Here's a trick, guys. Try empathy! Imagine that you have to look forward to almost certain rejection and harassment if you apply for a certain job. Would you do it?

Some women still do, and I have nothing but the deepest admiration for them.

The point is that it's absolutely insufficient to say that women "choose" lower paying work. It's not like we're choosing between a harmless block of wood and a second, identical harmless block of wood. It's like we're choosing between a boring, low-value block of wood and a hunk of especially spiky cactus that is completely covered in spikes so that no matter how you pick it up, it's going to hurt like hell. It's like choosing between the longer, safe path and the dark, rat-infested tunnel from which you're pretty sure you can hear a deep growl and also everyone in town says that a massive hungry troll lives in it.

And maybe it's hard for men to understand because they get to go through the dark tunnel equipped with a high powered-flashlight and a flamethrower and everyone knows the troll doesn't eat men. But for us women, it's a different story.

So until you've used your flamethrower to clear out the troll and let us have a turn with the flashlight, maybe shut the fuck up about "choice."
Posted by Not Sorry Feminism at 12:57 PM