This is what men's rights activists get mad about. Is it the constant killing of black men and boys by police? Nope. Haven't heard a peep out of them about that.

No, what they're upset about is being asked not to take up more than their fair share of space on public transit.

No seriously, these dudes actually started a Change.org petition to try and stop the Canadian transit system from posting signs asking men to stop sitting like this:

But that's just too much for MRAs to bear, apparently. Here's the opening paragraph to their petition:

Various people are looking to get the TTC to ban something they call "man spreading" which is a sexist term, and is the simple act of opening your legs. There are a lot more things taking up seats on busses [sic] than men opening their legs, such as purses, strollers, back packs and the like.


This in an of itself does a fantastic job of illustrating how the mind of an MRA works. They're super overdramatic and exaggerate shit all the time. Nobody is "banning" manspread. You won't be arrested or fined for sitting like a jackass. They're just putting up signs saying "hey remember that other people exist besides you please."

Secondly, even though they're constantly and unapologetically using sexist terms and cannot seem to fathom how men taking up way too much space on public transit is rooted in sexism, the second someone comes up with a term that singles out behavior that everyone can agree is mostly committed by men, they're up in arms about REVERSE SEXISM AND MISANDRY.

Do you see many women sitting like Captain Megacrotch up there? No? Exactly. Hence, "manspreading."

Then there's the last sentence. Other things take up space on transit. And it couldn't possibly occur to them why any of those things are not the same as taking up space with your own body.

Firstly, strollers??? Really?? You're going to say that taking on a necessary baby-transporting device is just as discourteous as manspreading? Really?

With purses, backpacks, grocery bags, etc., all genders take up extra seats with personal items. I tend to see men doing it much more often than anyone else, but most everyone can at least agree that it's not a gendered kind of rudeness. The spreading of the legs is.

And it also speaks to how clueless MRAs are about what women have to deal with whenever they're in public. Pretty much any woman will tell you that taking public transit is a worrisome affair, because of men. Who among us women hasn't had a man sit right next to her when there are a shit ton of empty seats next to nobody? Or had some dude try to chat her up while she's reading a book or has headphones on, because they feel entitled to ignore our clear "don't talk to me" signals? Or had a guy somehow manage to place his hand on his thigh and spread his legs out enough so that his fucking creepy ass hand is touching our leg?

We are constantly on the look out for creeps while in public and we do what we have to do to avoid this behavior, which we all know could turn violent if we responded in a way he didn't like. Putting bags on the seat next to us is one of those things. We do it because we don't want strange men to sit next to us. It's for our personal safety. I've heard woman after woman say that she does exactly this, but moves said bag when a woman gets on because another woman is extremely unlikely to creep on her. I do this. I'll move my bag for women or young children, but dudes can fucking stand. If you have a problem with it, guys, talk to the creeps.

There is literally no good reason to sit with your legs spread out like a fucking asshole except for personal comfort at the expense of others.

This sets a very bad precedent as men opening their legs is something we have to do due to our biology. It sometimes can be physically painful for to close our legs and we can't be expected to do so.


OH GOOD LORD THE BALLS. CIS MEN HAVE THEIR BALLS TO THINK OF.

Not that it's surprising or anything, but MRAs constantly forget than trans, non-binary, and intersex people exist.

But what any of these individuals, as well as men who are not fucking assholes, will tell you is that people with testicles and penises can sit normally, with their legs straight out in front of them, taking up one single seat, without pain. In fact, MRAs, if you experience significant pain while doing so, please see a doctor as soon as possible.

Seriously, talk about exaggeration and playing the victim.

Women have to deal with creeps demanding our attention, deliberately touching us, following us off the bus, becoming verbally or physically violent when we ask them to stop, but "please don't sit like an asshole" is male oppression. People with breastfeeding babies have to deal with people staring and freaking out when they do it in public, people with disabilities have to deal with slow and often inadequate accommodations, but this? This is going too far: 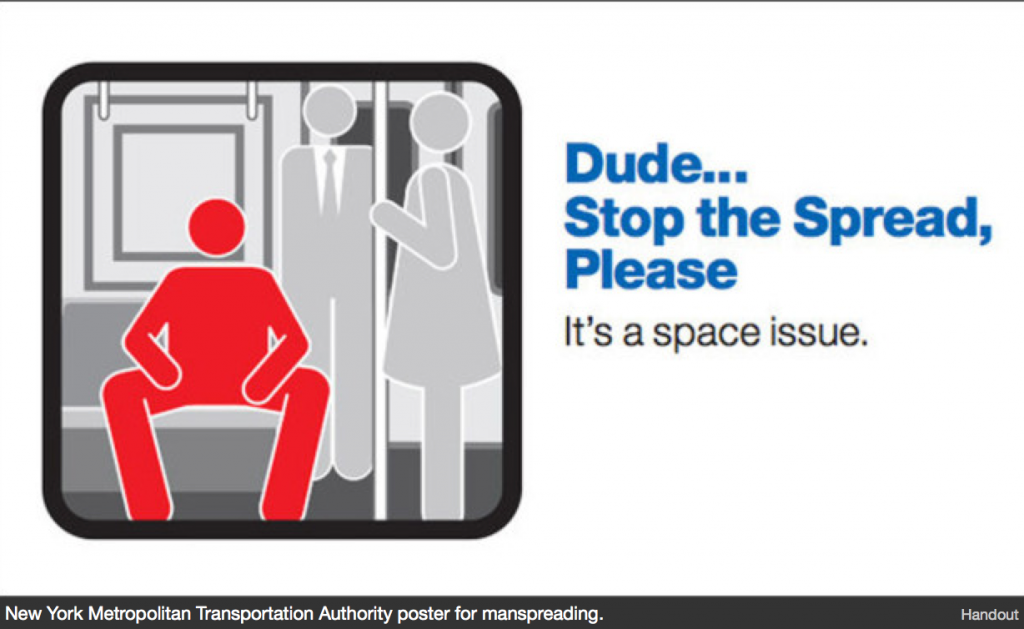 Life must be so tough for the cis men.

Posted by Not Sorry Feminism at 11:37 AM

How about making those chairs bigger to acomodate all genders?


Maybe some of us are really really tall with long legs....and some of those chairs are super small...not like in the picture...way smaller...


They don't want to change the chair size...because is bad for business...


Ok...but when an overweight women ask for body space....?
How come even the body of a man can be a insult to a woman?


I bet those workers that build that subway were males...
And they sit just like that guy.....

You use ellipses too much. You abuse the ellipses.


For tall men, have you consider keeping your legs together and slanting them both in the same direction? I know I'm pretty brilliant but I think if you try hard, you can come up with solutions of your own!


I'm sure that if fat women could shrink themselves on buses, they would. You know it's not impossible to sit normally, right?


And seriously, why are men so over dramatic? Transit puts up signs asking dudes to keep their legs together and you go straight to "WELL WHY DON'T YOU JUST KILL US ALL THEN???" Lmao.

This is sitting normally for men, the physiology of males and females differs quite significantly.

Hips, shoulders, muscular and skeletal systems, body fat etc are synergistically connected and inherently dimorphic in males and females and influence how a person moves and uses stance etc.

I would have thought that this very simple genetic fact would have been blindingly obvious even to a baby who recognise mother and father not by name, or even dress, but by something else, hmm, wonder what that could be.

It is not rooted in a males inherent hatred of women. Hatred of women has to be learnt, males inherently strive to do their very best for female favour as instinct. If males have to learn hatred of women, where are they learning it from? Oh yes the MRM, gotcha, right you are again Lindsey, you're so wise and knowledgeable.

The issue here is that the signs are targeted at men and do not consider that inconsiderate passengers can be anyone of any gender or demographic. Selfishness, ignorance and general apathy towards ones fellow humans is universal and is blind to gender. There are men who are not polite and women too.

If these signs were targeted at women, I can be damn sure that you would have one or Twp criticisms of them Lindsey and rightly so.

A simple plain black and white text which reads;

"Please be mindful of other passenger's space"

Would have been appropriate.

Also, proof read your posts, your creative writing degree is proving to be more useless than your gender studies one and that really is saying something.

Firstly, no, I will not proof read my posts. They will have weird typos and I don't give a shit. And you obviously have no idea what creative writing even means. And I don't have a gender studies degree.


Secondly, you're ridiculous. There is no physiology that makes any gender have to sit a certain way. Your comment is cissexist as fuck, but cis men don't have any reason to sit with their legs spread apart. Cis women have wider hips and more fat, especially in their thighs, butts and hips. They should be the ones who spread out more. Yet it's the opposite. The signs address men because men are almost exclusively the ones who spread out like that and fail to move when other people need to sit. You see it all the time if you take public transit. Why should the sign address everyone if only men are pulling this shit? Maybe it's a problem with men, and we should actually address the root of the problem instead of pretending that the root doesn't exist? How the hell do you solve a problem if you refuse to acknowledge where it comes from?


Should we address the new measles outbreak by vaguely saying "please be considerate of other people's children"? Yeah, that'll work. I'm sure people who believe in bullshit non-science will be convinced by that.


Also, cut out that heteronormative misuse of evo psych. Your lack of understanding of human evolution and psychology is embarrassing.