Everything Good is Made By Women

Did you know that Rock and Roll was invented by a bisexual black woman? 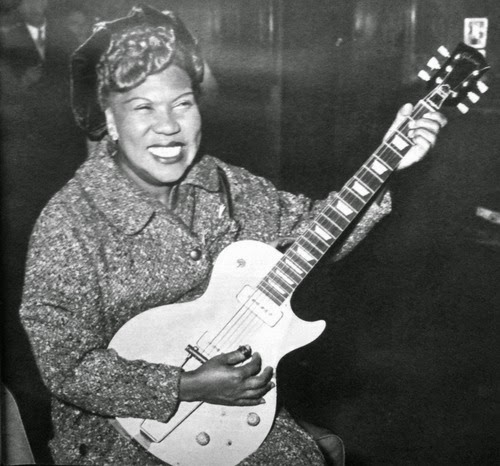 Sister Rosetta Tharpe (March 20, 1915 – October 9, 1973) was an American singer, songwriter, guitarist and recording artist. A pioneer of twentieth-century music, Tharpe attained great popularity in the 1930s and 1940s with her gospel recordings that were a unique mixture of spiritual lyrics and rhythmic/early rock accompaniment. She became gospel music's first crossover artist and its first great recording star, referred to later as "the original soul sister". She was an early influence on figures such as Little Richard, Johnny Cash, Elvis Presley and Jerry Lee Lewis.


Just thought you should know. Yet another thing that white men stole and took credit for.
Posted by Not Sorry Feminism at 1:00 PM


This world you love to hate...a male world..gived you all the things that you use to hate....


How about for just 1 day....only use things women invented...
And please make sure to eat only produce from a women farm...


Even the water that you drink....travels in pipes made by males...
The shit that you shit...yes....it is carried away from your house...by pipes put there by males....


Steal from you?
Do you want us to ask for things you got FROM US?

Hark, the unhinged whine of the entitled manbaby...are you deliberately misrepresenting what the article says or are you just that dense?
She isn't taking credit for the labour or innovation of any man (not claiming to have built her own guitar or microphone, is she?)...
But her labour and innovation is being accredited to men.
Nobody ever stole a damn thing from YOU, personally, because you've got nothing anyone would want. No go away.

There's a lot of evidence supporting the idea that women invented agriculture. Which led to modern civilization. You're welcome.

Evidence which you have left nameless.

I presonally prefer to categorise all of these inventions as human inventions. But if you must insist that we identify the gender of inventors, then yes, the vast majority of all of your modern conveniences have been designed, invented and maintained by men. That is the creative drive that testosterone fuels, it can have both a destructive and a constructive outcomes.

Also I did not, as you claim, think that Elvis invented rock and roll, all modern day popular music has its origins in black roots music and it only takes a cursory five minutes of research to learn this.

If we must only use inventions and culture that was first created by those with the same skin tone as ourselves and similar genital formation, what a terrible world that would be. But atleast I'd still have use of the telephone, television, bicycle, jet engine, electric motor and if those fail I could go back to the steam engine.

Do I have to do everything for you? Look it up, bozo.

You're such a meninist killjoy. I'm here trying to prop up a section of the population whose accomplishments have been stolen and ignored for centuries and you come swooping in to say "BUT LOOK AT ALL THE THINGS WHITE MEN INVENTED." Wow, thanks, because men never get credit for that shit or anything.

And omg that "testosterone" bullshit. Please please please actually learn something about a thing before you run your mouth. And stop being cissexist. Plenty of women have plenty of testosterone, which does not lead directly to creativity. In fact, every person's natural ideal hormone levels are different, and any natural trait a person has is only increased when those levels are closer to that ideal point.

"Creative musical behavior was associated with very low testosterone values in males, and with high testosterone levels in females."

"Scientists have shown that fossils of modern humans can be traced back some 200,000 years, but it was not until some 50,000 years ago that advanced tools and art were widespread. New research shows that that spark in cultural development could be associated with lower testosterone levels."

Do you know what explains how men invented all those things and women didn't? Power. Men were in power and said "hey you women have to stay home and not get an education or a job or be allowed to own property." Do you have any idea how difficult it is to invent shit under those conditions? The fact that a black woman was able to invent anything during a time when she was so overtly oppressed is astounding. But yeah, congrats, men, on inventing shit like the phone and steam engine and the atom bomb and heroin while you were completely free and encouraged and supported in doing so. I'm sure it would have been just as easy to do so if you had been blocked at every turn from getting a college education.

It's interesting that you've linked to a study in your first example that claims an "Optimal Range" of testosterone has an effect on musical creativity and use this to make an irrelevant point that was not disputed by any commentors here.

"Creative musical behavior was associated with very low testosterone values in males, and with high testosterone levels in females."

So what? Where in the commentary above has this been contested?


So you have proven that there's an optimal range of testosterone, too little or too much might not be optimal.


Is it possible that the "Optimal Range" occurs more in males or more in females?


Does this have any influence over other areas of creativity, and in whom do we observe a higher tendency of the "optimal range" males or females.


In short, the study you have cited is not the conclusive evidence you think it is to win your argument. it actually raises more questions in this debate than it answers.


the second link is an article which talks about people with credible sounding titles making assertions relating to a "study" that has not been linked to or cited.

Um, the guy literally said that testosterone fuels the creativity that gets shit invented, which is why men have invented so much shit. So I posted a study showing that low testosterone in men is connected to creativity. How is that irrelevant?

Your blathering about the "optimal range" makes no sense at all.


The second link says that the study was published in the August issue of Current Anthropology. You know how to use Google, right? The full text is there for those willing to put in the tiny amount of effort necessary to find it.


Why are you trying so hard to defend a sexist and cissexist bullshit notion about testosterone that has literally nothing to back it up?

No there isn't. There's ZERO evidence of that, given men invented agriculture.


No it doesn't you idiot. US music particularly rap and hip hop yes. That's not the world you fucktard.

Banned for being a ignorant, racist, ableist piece of shit baby.