I love love love that there's a whole "humorless feminist" trope when anti-feminists are the most humorless bunch in the universe. Feminists are constantly making jokes that go right over their heads.

Remember that "experiment" where a woman decided to stop moving out of the way of men? Check it out: 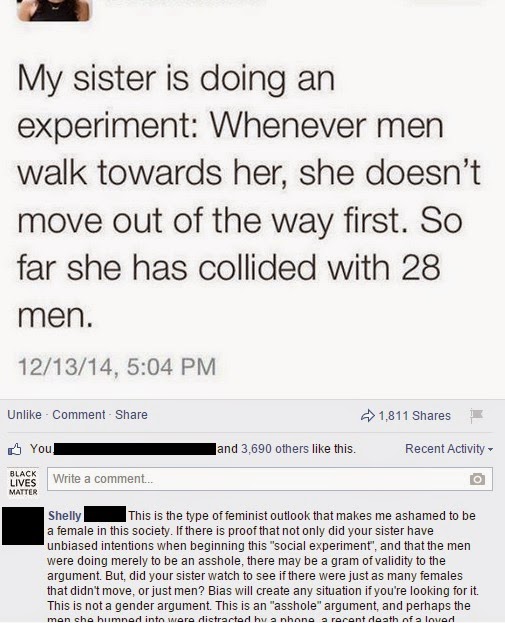 [Comment text: This is the type of feminist outlook that makes me ashamed to be a female in this society. If there is proof that not only did your sister have unbiased intentions when beginning this "social experiment", and that the men were doing merely to be an asshole, there may be a gram of validity to the argument. But, did your sister watch to see if there were just as many females that didn't move, or just men? Bias will create any situation if you're looking for it. This is not a gender argument. This is an "asshole" argument, and perhaps the... (screenshot cuts off here)]

LOL. SHELLY THOUGHT IT WAS A REAL EXPERIMENT. Or that's what she's acting like. It's a TWEET, Shelly, gawd, learn to take a JOKE, Shelly.

Posted by Not Sorry Feminism at 10:50 AM

lmao where exactly is the humor?

Thanks for proving my point!