This is Some Next Level Irony

Soooooo. I don't even know how to respond to this. But some counter-protesters to the anti-racist police brutality protesters went out to "support police" wearing shirts that say "I Can Breathe."

And they're all white. White people. Wearing shirts that say "I Can Breathe." To support cops. As a counter-protest to the people saying "I can't breathe." 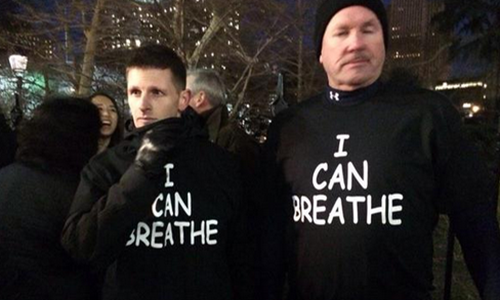 But. But. But we know. We know you can breathe. Because you're white. That's the entire point. You see. Because. You know.

You would almost think that they understand their own white privilege, but no. Their ignorance of their privilege goes so deep that it comes full circle. I honestly can't even fathom what was going through their heads when they decided to make these shirts. And I'm white.

“We’re supporting law and order. We support the police. We believe they are the thin blue line that supports us and protects us,” said Phillip McManus, a Rockaway, Queens resident. Mr. McManus was clenching an American flag.

“You know what? We’re not going to block traffic. We’re going to follow the law,” he added. “This is what happens when you have a government that runs amok and doesn’t represent the people.”


YES. THAT IS WHAT HAPPENS. WHEN THE GOVERNMENT DOESN'T REPRESENT THE PEOPLE. THAT'S WHY BLACK PEOPLE ARE MURDERED BY WHITE COPS WHO CAN'T BE INDICTED. YES.

This is too much.
Posted by Not Sorry Feminism at 11:02 AM