Ferguson has an amazing community. They've come together to keep educating kids while schools are closed, keep everyone fed, give people places to hang out and sleep during protests, and this: 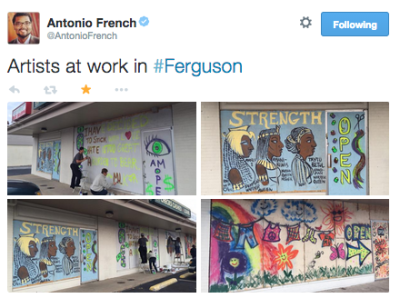 You can see more of this on the Social Justice Koolaid Tumblr.

Just remember that this form of community building and show of love for one another is not the better form of resistance. I'm not putting this here to say it's what the people of Ferguson should be doing rather than protesting, and I am not condemning violent action. Because violent resistance against oppressors is the only way liberation ever happens, and it shouldn't be on the oppressed to be non-violent when the oppressors have been murdering them almost daily.

Also, "vandalism" is like a splinter compared to what the police have been doing to black people, so fuck you mainstream news.

But it's also good to remember that there are people who can't participate in direct protests for one reason or another, and things like this are just as helpful to the cause. It's a wonderful way to hold together a community that's under attack.
Posted by Not Sorry Feminism at 3:00 PM