My Privilege in the Ferguson Protests

I'm not going to lie. Going to those two Ferguson protests last night was exciting for me. I was excited to go, and conflict with the cops was more thrilling than scary. My parents remarked on Thanksgiving that being tear gassed would be like a badge of honor for me, and they're right. These protests were an experience for me, like going to France and eating snails or whatever. I've been bringing it up to my friends. Bragging, really. Showing off.

This is white privilege.

White people need to pay attention to this. If you're white and you've been to the Ferguson protests, you've likely felt similar feelings as I've described. It's not that you can help feeling that way, but we need to be aware that being excited about these protests or any protests is a manifestation of our privilege. We may have also been driven to protest by anger, moral outrage, desire to support, etc. But the act of protesting is fundamentally different for us than for people of color.

This was not an experience for them. They weren't going so that they could say that they'd done it. Black people, especially, were out there fighting for their right to life. Their very right to exist as black people. It's the difference between traveling to Europe so that you can feel more worldly and fleeing to Europe because if you stay in your own country, you'll probably die.

They felt grief and likely fear along with anger. Confronting police isn't a thrill for them. Not only do they have to deal with the repeatedly demonstrated fact that they can be killed over nothing simply because they're black, they have to go out and confront the very people who are killing them. The risk of harm and death is far, far greater for them when protesting and pushing up against the police than it is for us white people.

I did not fear for my life, not once. I was well aware that none of those officers would have shot me or beaten me. I did have to face a greater risk of sexual assault due to my being a woman, but it was also less of a risk than for the women of color in the crowd. And I know that if a cop was unnecessarily rough with me or sexually assaulted me, I had a better chance of being believed simply because I'm white. 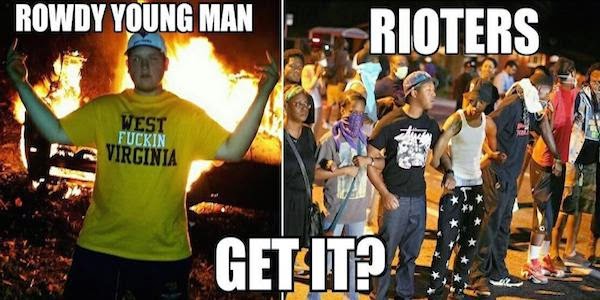 We white people need to keep this in mind. This is why we need to keep quiet and do what the protesters of color ask of us, and generally follow their lead. We need to do so out of consideration for their safety. I witnessed a white guy argue with the people of color who were instructing us to disperse and make our way individually or in small groups to the tree lighting ceremony when the SPD was trying to stop us from getting there. The white guy (another anarchist) was shouting that splitting up allowed the cops to pick us off and break up the demonstration. He was arguing that we should stay together and push through the line of cops in riot gear with tear gas, pepper spray, and, of course, guns. He was speaking through his privilege, unaware or willfully ignorant of the fact that he was in far less danger than the people of color in the crowd.

If we had elected to battle with the cops, he wouldn't have been the one who ended up injured, arrested, or killed for it.

He needs to shut up, and so do I. I shouldn't be bragging. If I want to tell my white friends about it, I need to make sure to include the fact that my white privilege made it both easy and optional in a way that it isn't for people of color. This isn't about me or my moral outrage. It's about the lives of black people and other people of color who risk death via cop or racist vigilante just by existing.

In addition to my white privilege, other forms of privilege made attending the protests easy for me. Able-bodied privilege is a big one. My ability to easily walk and run allowed me to march for hours. People in wheelchairs couldn't have taken the escalators through the mall with the rest of us. Invisible disabilities and chronic pain can make it much more difficult to keep up, and forget about fighting with police.

My boyfriend has a rare form of cerebral palsy that has weakened the left side of his body. Because of the extra weight he's had to put on his right leg for his entire life, his right knee gave out a couple years ago, resulting in a severe sprain. It hasn't been the same since. On the day of the grand jury announcement, we left the protest early because his knee was beginning to hurt, and if he pushes it too much, he pays for it the next day.

I could have kept going for as long as I'd wanted. He was unable to make that choice. People often forget about disability in things like this. And just in general.

Mental illness can also make it difficult or impossible to do things like this. Depression, fear of crowds, social anxiety, agoraphobia, etc. My own relatively mild anxiety disorder held me back from chanting a lot of the time, and from talking to any other protesters. At times when my anxiety was much worse, I might not have been able to go at all.

And let's not forget about the inherent danger of being seen in public when you're a trans person.

Privilege, or lack thereof, has an effect on everything we do. Literally everything. Participating in these protests was remarkably easy for me compared to many others, and then I got to go home and separate myself from the issue we were protesting about. I can forget about it, because I will never be killed based on my race. Or my abilities. Or based on how my gender identity lines up with the genitals I was born with.

Privilege is a life and death issue. If you're not aware of that yet, then please, just stay home.
Posted by Not Sorry Feminism at 1:00 PM

This was a great post. Thank you for acknowledging these things, it helps the rest of us to keep ourselves in check too. I have always felt uncomfortable with the idea that someone (white) can "save" black people or Mexicans, or trans folk. This gives me some words to my thoughts, keeps me honest.

Thanks for saying that.

Bravo. I'm speaking from the other side of the globe, Brazil specifically, and I'm quite aware of the feeling you have. Last year we've had a series of riots here, and coming from a white, well-off family, I felt like my participation in them was almost a casual affair, almost party-like with many of my colleagues. Not to say, of course, that it does not have it's merits. Every person counts. But I think having the perspective of where you come from and how that affects your views is a necessity.

A few moments ago I commented on your article in regards to Gamegate, and I've been reading all of them from the top since. Again, bravo.

Thanks, glad you're enjoying them!