This happened back in April but I don't think anyone really noticed:

It may have not made the news because this woman, Amani Terrell, is a black woman. 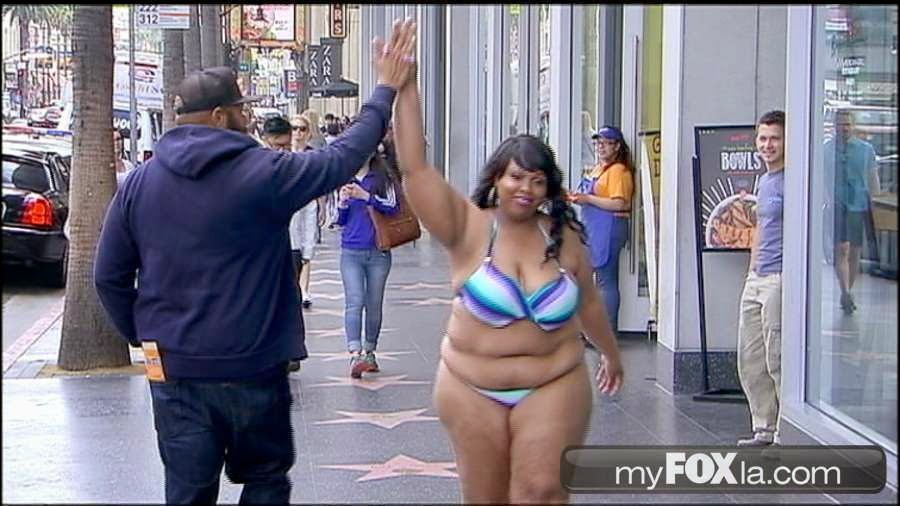 The only shitty thing about this article is that it says she "knows she needs to lose weight." Actually, while she's allowed to lose weight if she chooses to, she doesn't "need" to do anything she doesn't want to. It's no one's business! But anyway, her responses to gross shitty men are awesome.

While cameras were rolling, one man told her she made him lose his appetite, and another called her “Precious,” as he snapped her picture. Still, Terrell shakes the haters off because she’s confident, no matter her size. What do you think?

“That was very unkind,” she told the man. “But that’s cool because I love myself.”

You again? Haven't you grown tired of being wrong?


Even if you were right about fat equaling unhealthy, which you're super not, how is her health any of your business?


No one needs to do anything when it comes to their own bodies. Leave your incorrect ideas about health at home, bro.

"Even if you were right about fat equaling unhealthy, which you're super not, how is her health any of your business?"

Firstly being fat is in fact unhealthy: This is objectively the case. You can yell about fact acceptance until you turn blue in the face, but at the end of the day being fat is still unhealthy.

She knows she is leading a physically unhealthy life style & that she needs to stop living that life style to stop being so unhealthy.

The study you cited only took in to account metabolic fitness, not other aspects of health was considered.

if I were saying it, but I'm not, she is: She knows her health is contingent on her physical form & she knows she should be doing something to improve that by losing weight.

NEWS FLASH: I don't need to know this woman, she knows this woman, being this woman & she knows she should lose weight for the benefit of her health.

Dude... I don't even know what to do with this. The ARTICLE which cites MULTIPLE STUDIES which DIRECTLY REFUTE the black-and-white idea you have about health and literally say that you can be fat and still be just as healthy or more healthy than a thin person does not straight up say "Matthew Lane is wrong," but you clearly are. If at this point you aren't willing to change your mind about your idea of weight, then you're hopelessly clinging to false ideas for reasons outside of anything resembling logic or concern for health.


And the next part?

No, the article does not misrepresent anything. You are so full of shit.

"She says it herself."


Where? When?? You are so fucking full of shit it's unbelievable.

I never judge anyone about the way he/she looks, because an adult person is aware of his/her weight and happy with it, or not. It can take an enormous amount of self-improvement just to love yourself as you are.


Otherwise, I think there's something insecure about rocking bikini on Hollywood Boulevard. If you keep on talking about how confident you are, you're obviously not so confident. That's just my opinion, though.

"knows she needs to lose weight. Actually, while she's allowed to lose weight if she chooses to"! The article is rather interesting for me. Moreover, recently I have ordered an essay http://idealessay.co.uk, that highlighted the problem discussed above

Let your dissertation be the most amazing and helpful for further academic work uk dissertation writing service.

All women are amazing! Whether they have colour or not.

By the, while thinking of women you can order an essay using valwriting.net

Hi! The website that will help you to order your essay while examination essay writing.

If you have faced issues with resume help just ask professionals for a qualified help.

If you have faced issue with resume help just ask professionals for a qualified help.

Thanks for this inspiring article. These ideas are
really useful. Get going with my uk dissertation writing service.