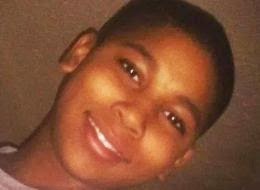 During the renewed national attention on Ferguson, black youth have been getting murdered by police or white vigilante assholes every 28 hours. One of the most notable cases was a 12-year-old black boy who was shot down by police for playing with a toy gun near a playground.

A playground. You know. Because he was 12.

Meanwhile a full grown white man spent two hours walking around a child's park waving around a REAL gun while police TALKED HIM DOWN UNTIL THEY COULD APPREHEND HIM ALIVE.

That boy's name was Tamir Rice. He's dead now. Surveillance video shows a cop shooting his gun at the child immediately after leaving the police vehicle. The kid was not pointing the fake gun at the officer. The person who called 911 about the 12-year-old with the fake gun even told the operator that the gun was probably fake.

Will this officer even have to face a trial? Probably not, since it's almost impossible to indict a cop.

Oh, and the media? Despite the fact that video evidence shows the kid being shot down immediately after the cop got out of the car and despite the fact that the person who called 911 only said that the kid was pulling the fake gun out of his pants and then putting it back in again, they chose to describe him as "waving the gun around." Why do people trust mainstream news media again?
Posted by Not Sorry Feminism at 1:00 PM


Because they're too lazy to hunt down other sources for a more objective viewpoint, or actual facts, for that matter. Not many people would enjoy being shown facts that mega-corps own everything these days, including the news industry.

Another reason is probably that, for older folks, their trust of earlier news anchors such as Walter Cronkite has been slipped over current network news "faces" like a pillowcase over a pillow.


There's a reason why "Question everything" are good words to live by.


"Meet the new boss
Same as the old boss..."
"Won't Get Fooled Again"
The Who