As you've probably heard, last night they finally announced the inevitable grand jury decision that Darren Wilson, killed of Mike Brown, will not be indicted. No trial.

No, I am not surprised. That doesn't make me any less angry and disgusted and contemptuous.

I watch the prosecutor spend over ten minutes whining about how forms of media and spread information that he and the Ferguson police couldn't control made it so much harder to convince the grand jury that they didn't even need to have a trial for a man who shot an unarmed, surrendering teen six times. When he finally said that there would be no indictment, I turned him off and my boyfriend and I drove down into Seattle to join the protest. 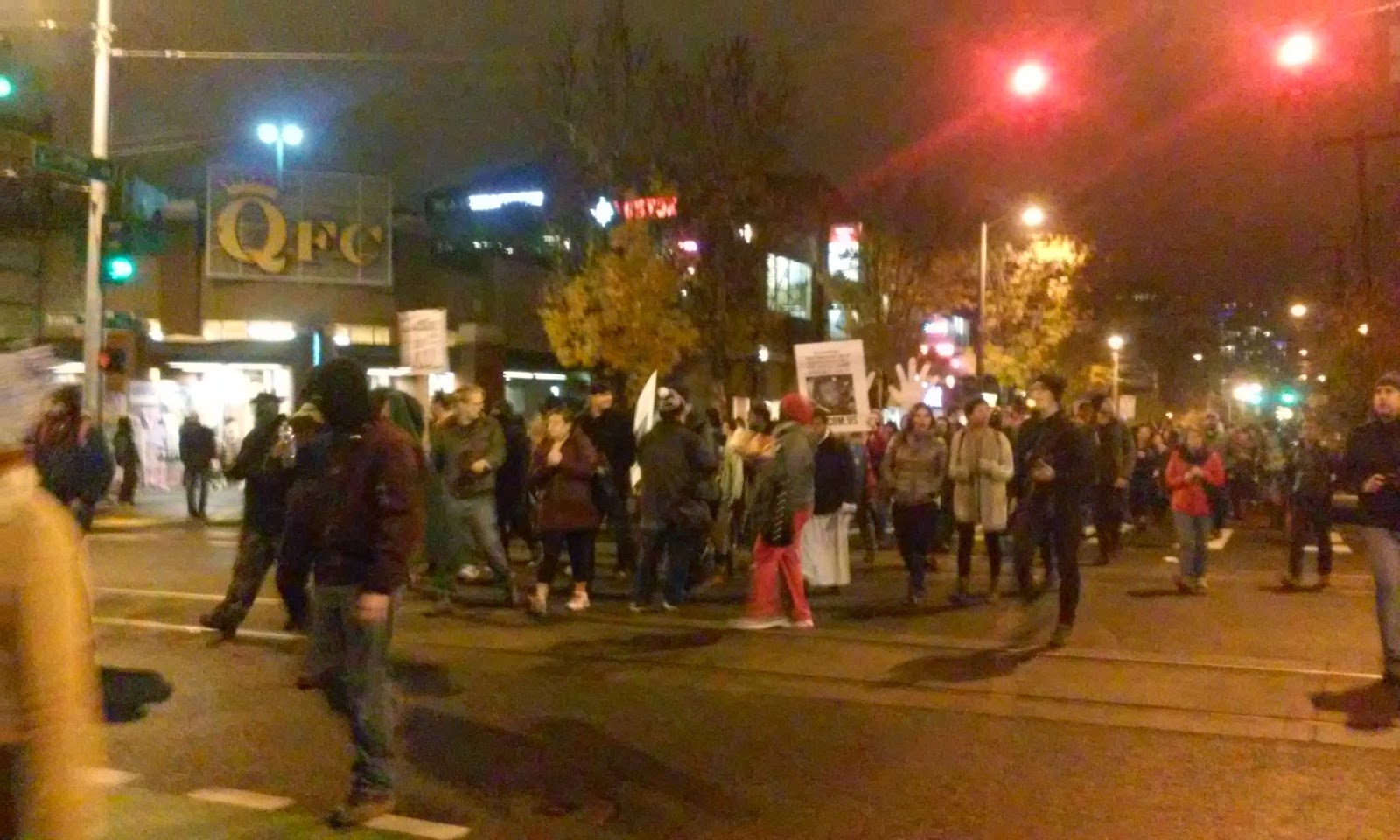 We caught up to them at Capital Hill after navigating around blocked off areas and following police lights. 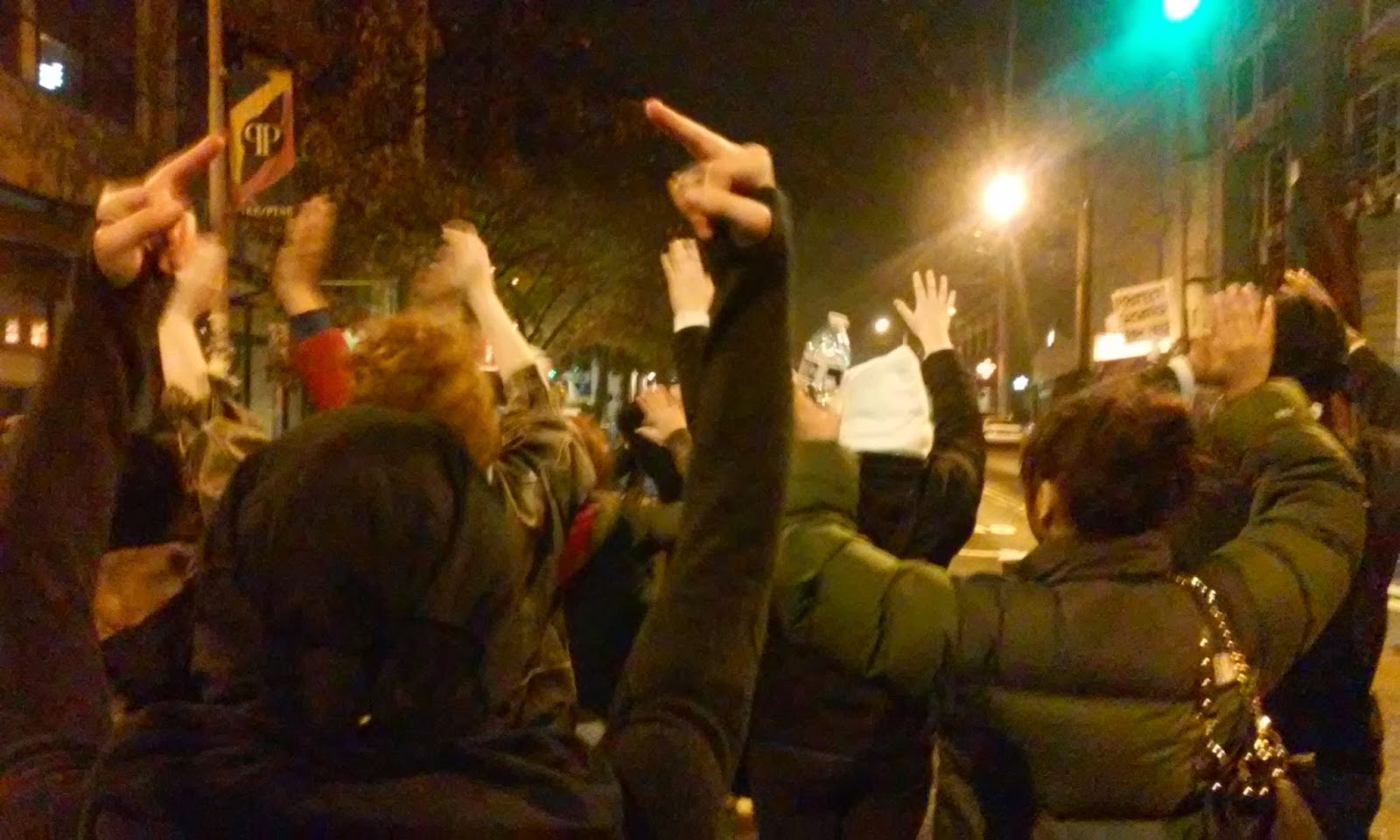 There was some conflict between protesters who wanted to chant "hands up, don't shoot" and others chanting "hands up, shoot back." I was trying not to add to any conflict and follow the lead of the black protesters over the ever-present white anarchists in the crowd. 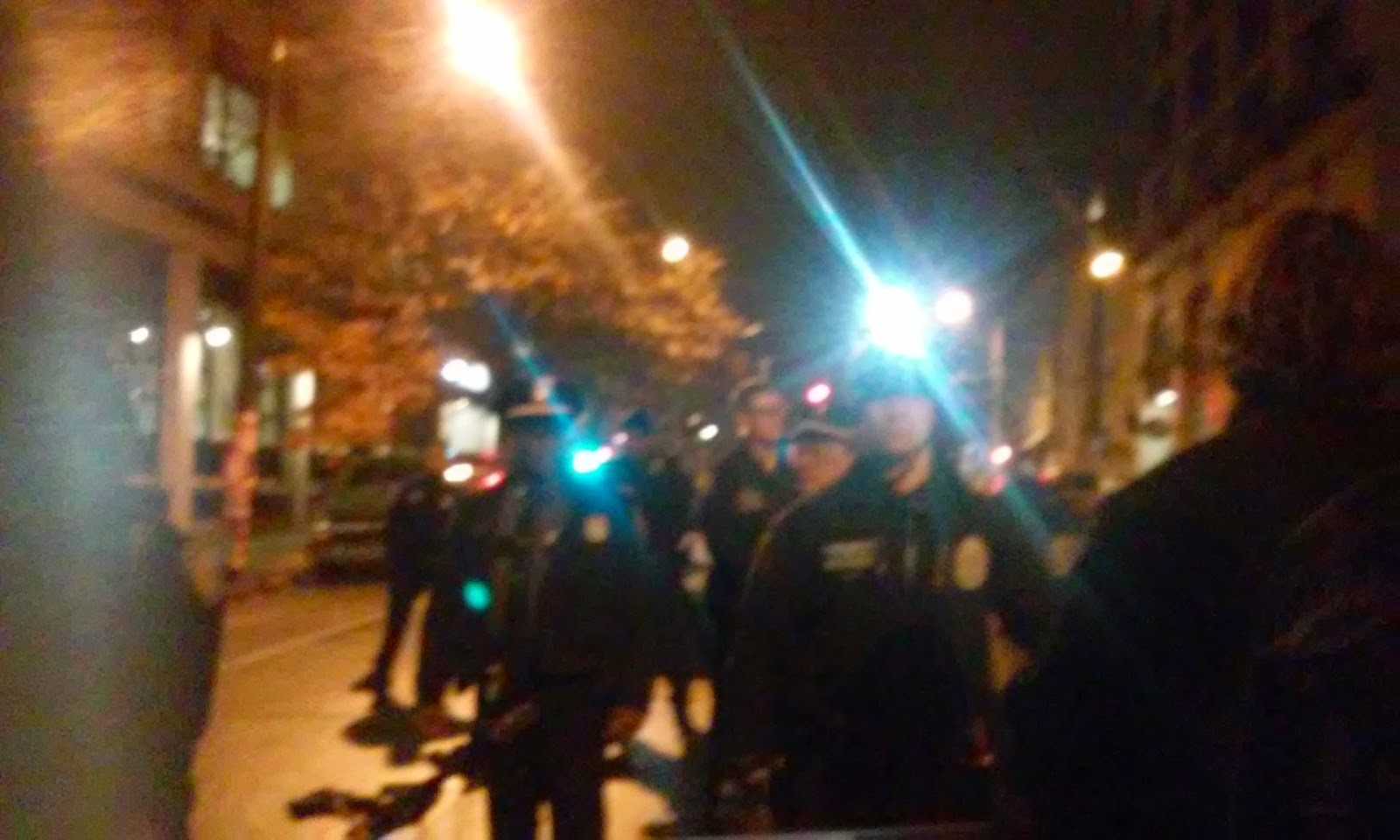 At one point the crowd knocked over some minor barricades and marched up to the police. In the photo above, my boyfriend is asking the cops why that specific area was blocked off. The answer was "property damage." Why was that stretch of that one street more important than others? No idea. Was there any property damage in Seattle last night? Maybe, but not from protesters. 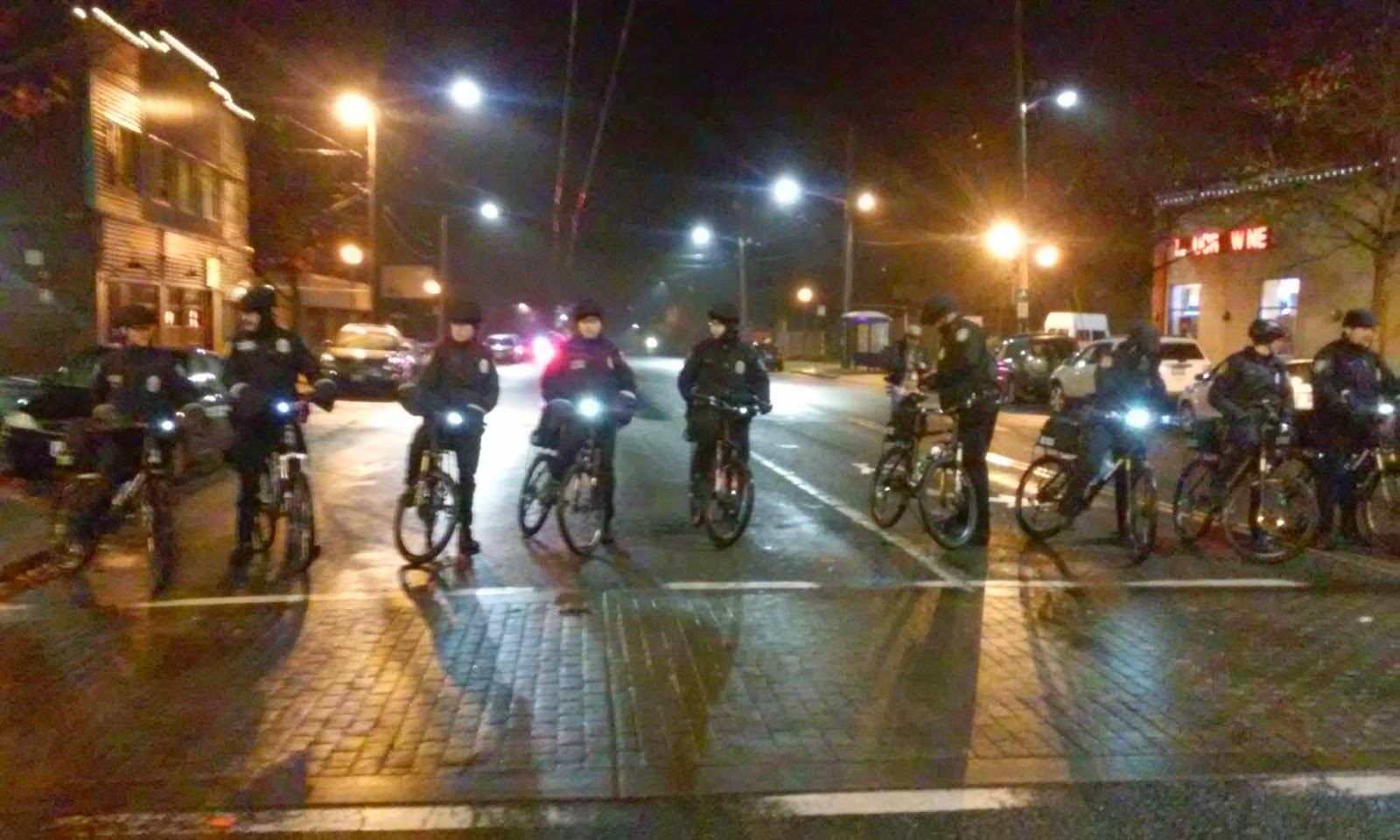 We were escorted the entire time by this battalion of bike cops. They rode on the sidewalk while we marched the streets. Cruisers kept their distance ahead of us to try and direct traffic away from where we were headed. 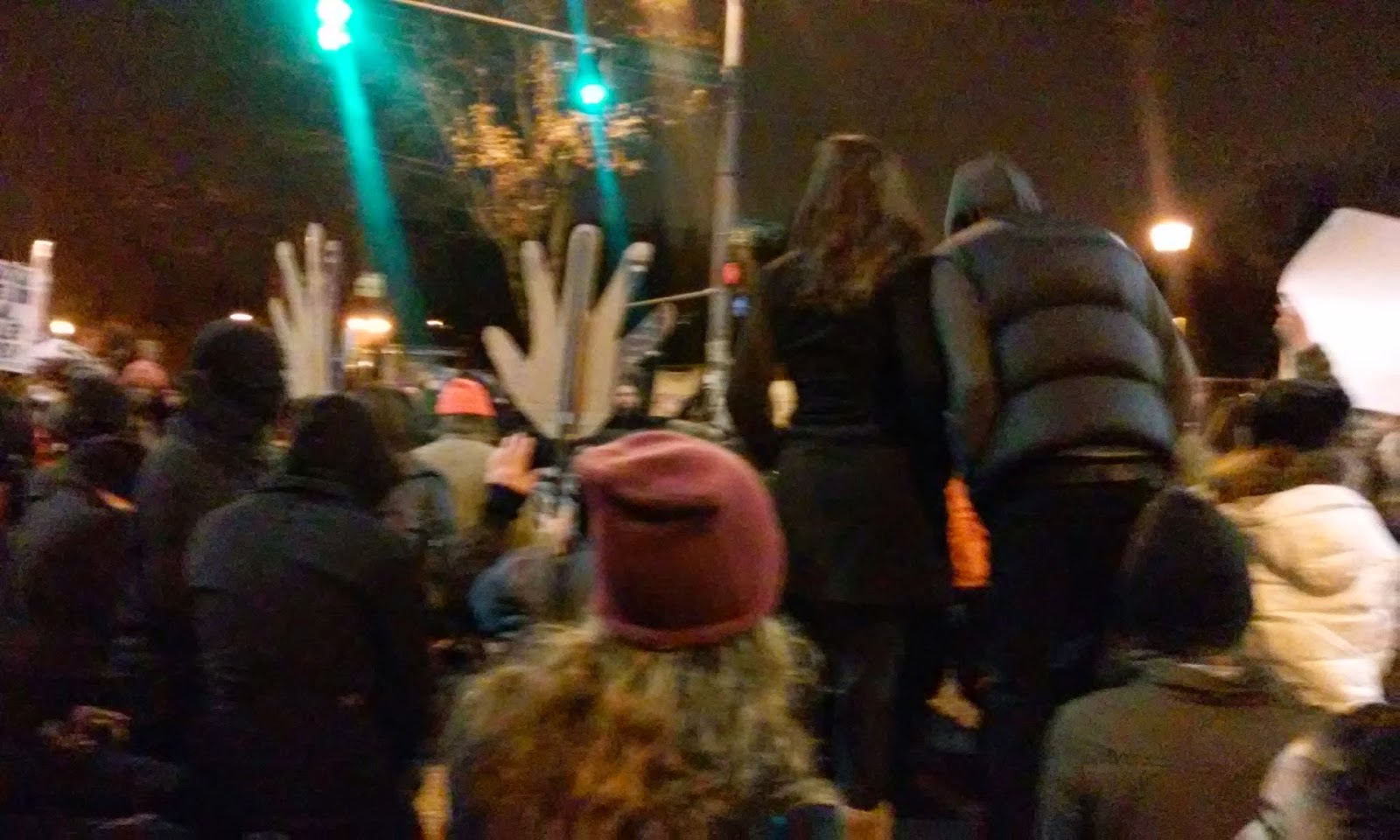 We stopped at 23rd and Union to kneel in the intersection where a young man was killed by Seattle Police. We sung prayers for Mike Brown and chanted "When Mike Brown died he was kneeling on the ground." 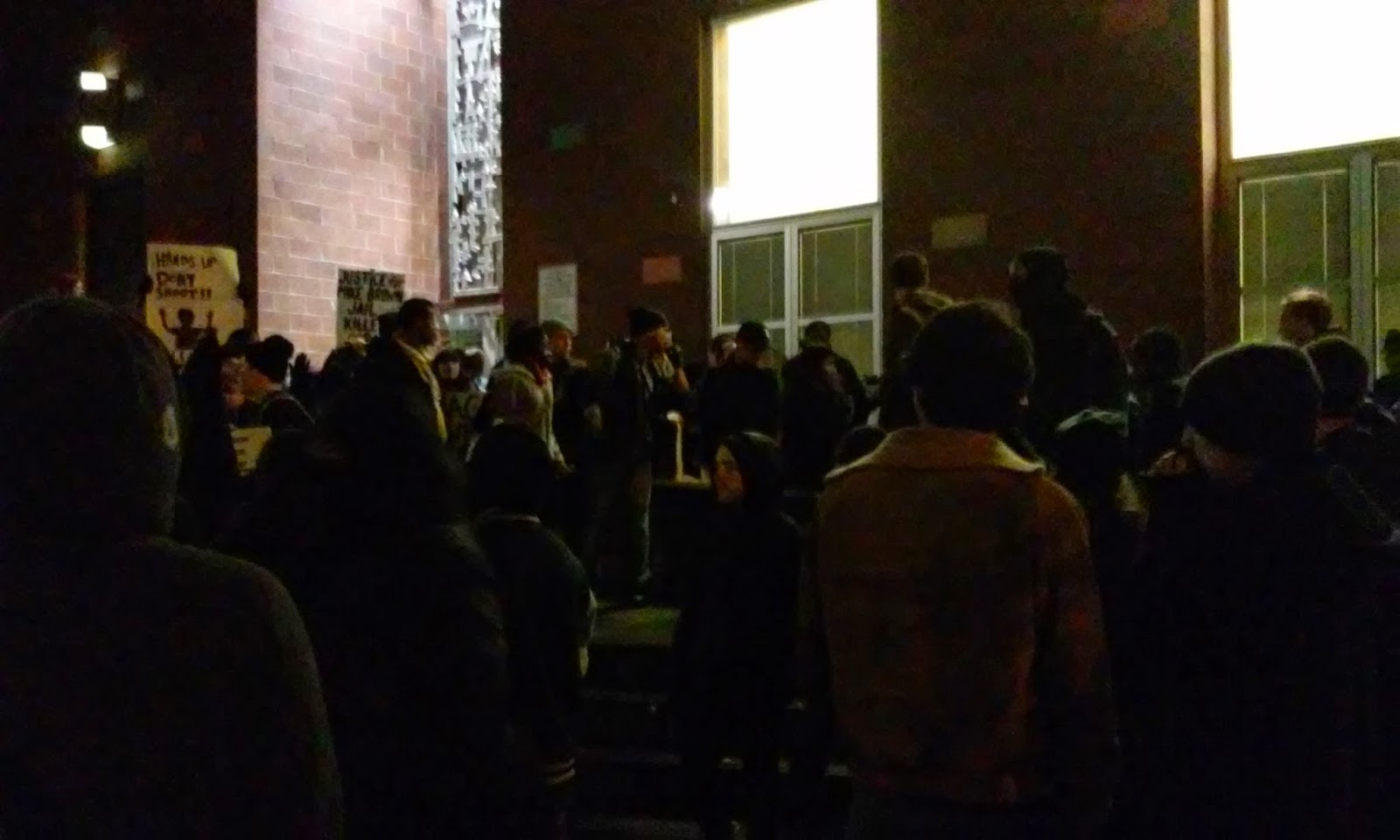 We marched to the Garfield Community Center where the SPD was apparently holding a meeting to discuss how to keep protesters off the streets. Gotta keep that commerce going! Some protesters went inside to interrupt the meeting and say something to them, not sure what happened. This was also where the fucking white anarchists started getting antsy because I guess they couldn't feel sufficiently tough without being able to walk around shouting about how cops suck. I actually heard one of them arguing "this has nothing to do with my race." Fuck you, white anarchists of Seattle. Piss off.

Not long after this, my boyfriend and I were forced to turn back because his bad knee was beginning to bother him, and we had a long way back to the car already. This was when the crowd was starting to head toward the freeway. Apparently, when they tried to block I-5, things escalated. I heard reports from other protesters (friends of my boyfriend's brother) that tear gas was used to stop them. I also heard reports of flash bangs, and a Seattle Times reporter caught shots of police using pepper spray on protesters. She also reported the use of a smoke bomb. 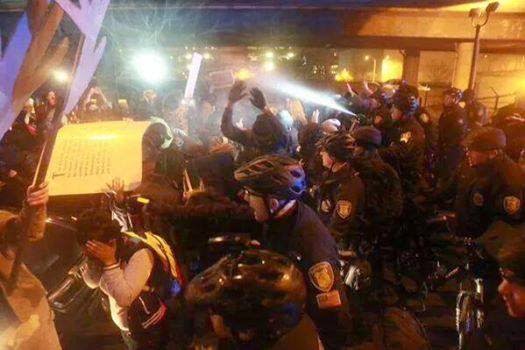 If you want the full story, just check out Paige Cornwell's Twitter feed.

I wish I could have stayed and supported the protest when they really needed it, but we can only do what we can. And I wasn't about to leave the boyfriend to walk the streets alone at night.

I've heard there will be a walk-out at Garfield High School at noon today to protest the grand jury decision. There is also a protest scheduled for this Friday at 1 pm. Forget shopping, come protest.

There's a ton of other stuff to report on. The entire transcript of the grand jury proceedings is now available to the public. A 12-year-old boy, Tamir Rice, was recently shot and killed by police for playing with a toy gun. The National Bar Association is calling for federal charges against Darren Wilson since the grand jury failed. One of the nine white people on the grand jury was an admitted racist. Darren Wilson called Mike Brown a "demon" in his testimony.

White people: Read. Listen. Talk to one another. Try to find the guts to talk to your family around the Thanksgiving table about anti-black racism in the U.S. If they don't want to talk about that, then maybe switch to the subject of Native American genocide, I dunno. But don't let this roll off anyone's back. Don't stay quiet. Learn the facts and spread them around.

For Mike Brown and every other black life. Black Lives Matter.

Posted by Not Sorry Feminism at 11:31 AM