UPDATE: I mentioned in this post that some of the tables in the food court were turned over after the tree lighting. Other protesters are reporting that cops became aggressive in this area while we were leaving, and were turning tables over. One person reported being shoved into a table, which knocked it over. So we were cleaning up after the police. You're welcome.


On Black Friday, I attended another protest of the grand jury failure to indict Darren Wilson. It was planned on Black Friday specifically to have the biggest impact and to be seen by the most people, to disrupt their day and force them to pay attention to something that makes them uncomfortable. Which is why it's so hilarious to see so many Seattleites whining that we did exactly that.

The Facebook page of local news station KING 5 is full of white people moaning about how they were just trying to shop and watching a tree light up and then those damn protesters RUINED EVERYTHING.

LOL GOOD. That's what we were going for. (P.S. A lot of those comments are super racist so you might not want to browse that shit.)

What's super ironic are the people complaining that some white kids were frightened or that children theoretically could have been injured by the protesters somehow when we were literally protesting the frequent murder of black youth.

Fellow white people, your kids are fine. Black kids are not. That's why we were out there.

Also, nobody at all was hurt by the protesters. The vast majority of people hurt during protests are protesters who are hurt by the police. The only time the Seattle protest became at all violent was when the cops tried to block us from getting back downtown to attend the Christmas tree lighting, which is totally fucked up and I don't see how that's legal or constitutional.

Anyway, here's what went down.


I got there a half hour late and had to go into the Westlake Center mall to use the bathroom (I was excited), and was lucky enough to run into the protesters who were marching through the mall, going up the escalators toward me. So I joined them there, and we went to the top floor to the food court to demonstrate there for a couple minutes. 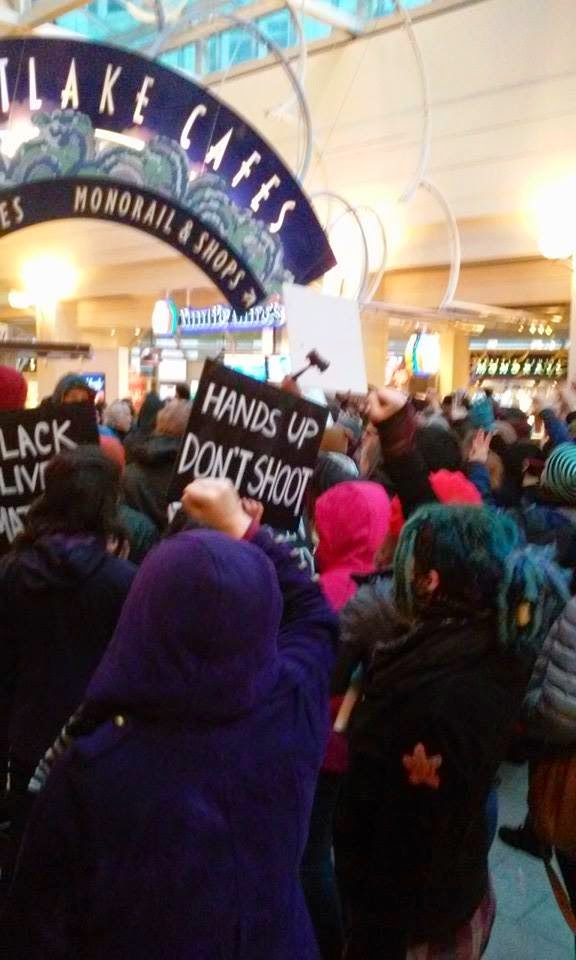 We then left and were intending to head to Pike Place through the subway system, but as we reached the tunnel entrance, the police started to close the gate to block us. I happened to be near the front of the crowd at that point, so I was able to run through to the other side and got some footage of the conflict that happened. A line of protesters risked themselves to hold the gate open while police harassed them, eventually teaming up to push them away from the gate to get it closed, with a good 20 of us trapped on the other side. Eventually, we were forced to go through the subway to get back out and rejoin the group.

The video is really shaky because my hands were shaking. I'm not used to shit like this, because, you know, privilege.


After that, we marched to Capital Hill, where we kneeled at Pike and Broadway for four and a half minutes of silence. While one of the protest leaders were explaining what we were going to do and also calling out the nearby SPD cops for the killing of Ditidaht First Nations man John T. Williams, one of the cops was smirking and making comments to the cop next to him. That guy is a disrespectful piece of shit. He could at least have pretended to be solemn.

Next, we went to a corner with some popular spots like Cafe Vita, and protesters split up to confront the people inside and chant "black lives matter" outside the doors.

After that, persons of color were called on to speak about their experiences and thoughts and feelings. There was some incredible and moving stuff said. I wish I'd been able to capture it on film. The crowd stood around, cheering speakers on.

Once that was done, it was decided that we would go back downtown to disrupt the annual Christmas tree lighting. On our way, we were met with this:

Cops were doing everything they could to block routes into downtown. They were lined up in riot gear specifically to keep us from getting to where our demonstration could be most effective. Restricting our freedom of movement. Naturally, things got a little ugly. I got my first taste of tear gas here.

After one attempt to push through the line of cops, with them aggressively shoving their bikes at us, we decided to disperse and make our way downtown in smaller groups, taking unconventional pathways. Remarkably, the vast majority of the group, if not all of it, made it downtown and rejoined each other. At one point, cops were still lined up to block the group I was in from getting to the tree lighting just around the corner. However, there were more protesters on the other side, and the cops found themselves surrounded. After a couple minutes, they relented and let us through. NICE TRY, COPS.

Anyway, we gathered in front of the still unlit Christmas tree to kneel and chant, and to boo the announcer and the terrible music. 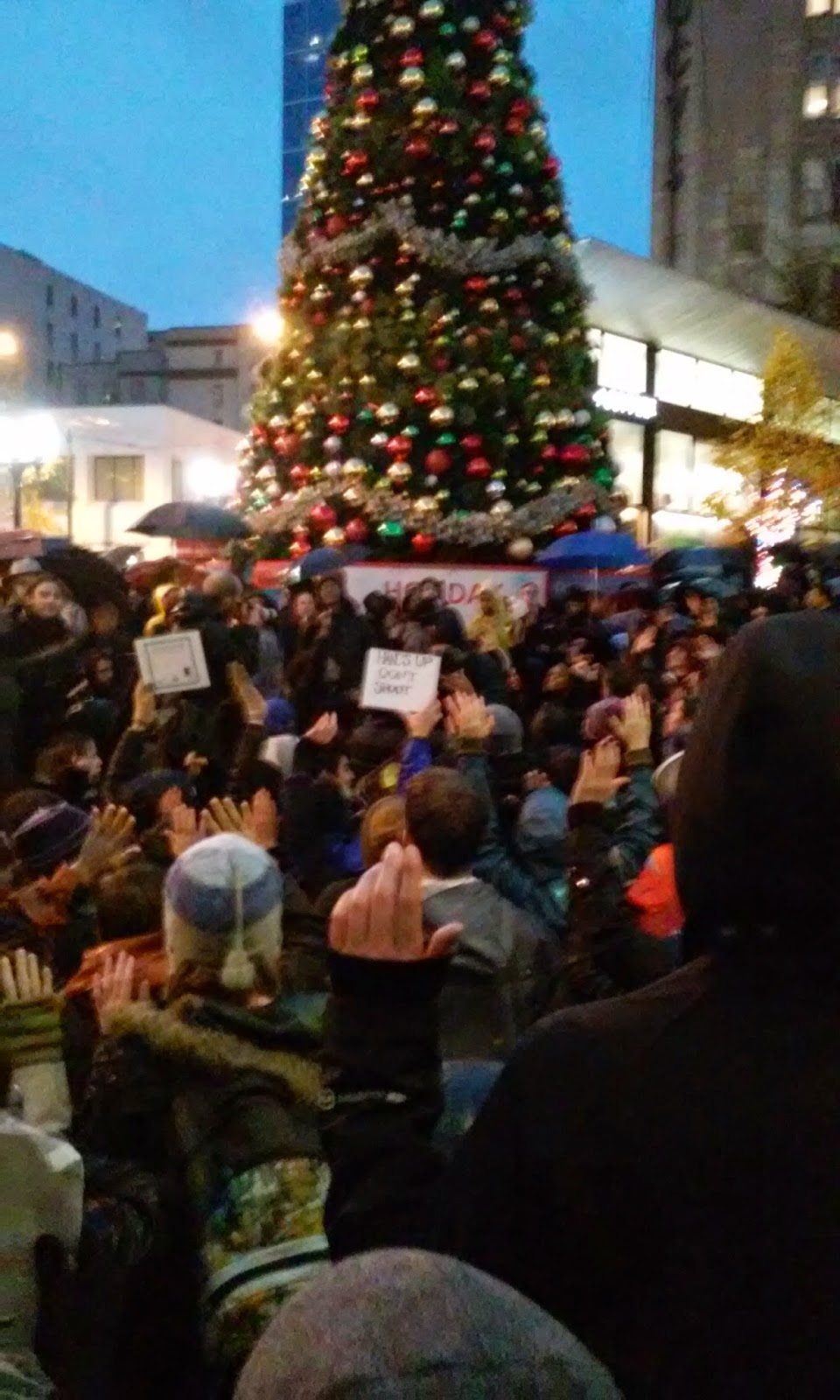 After awhile, we entered the Westlake Center mall again and made our way up to the balcony where the announcer and band were. That's when we got really loud, chanting "black lives matter" and "this is about Mike Brown" and "no justice, no peace, no racist police" over the music. We were loud enough that they were unable to do their cheesy countdown, and eventually just flipped the switch to light up the tree and start the fireworks.


Shortly after, there was a scuffle between some protesters and an individual that I couldn't quite see. I still don't know who it was or if they were at all involved in the tree lighting stuff. Cops then showed up and made us leave. As we were going back inside, I could hear some crashing sounds like tables being flipped over (the balcony was just outside the food court). As I got there, protesters were setting tables and chairs back up. These individuals were mostly people of color. I wouldn't be surprised if it was the anarchists who messed up the food court to begin with.

On the ground floor of the mall, I ended up in the middle of a die-in. I laid down and proceeded to wonder if it was appropriate for me to be a die-in body, since it's not usually white bodies who end up dead in the street from police murder. But I thought it would have been totally awkward for me to get up and leave at that point. I'm awkward.

There were more speeches, this time to address the crowd that wasn't part of the protest. After that, we got up and went back outside to the tree.

That was when I left, because it had been misting at the very least the entire time, and I was soaked through despite a waterproof jacket, and freezing my butt off. I heard that the protesters went to a park after that, but I don't think there were any further confrontations.


Basically, anyone fretting about this protest being "violent," especially in comparison to actual riots (like the one less than a year ago in Seattle after the Seahawks won the Super Bowl), can shove it. I heard that at one point, some unidentified group of protesters splintered off the main group and chained one door to the Westlake Center mall shut and scared some little boy choir group. As though the entire mall only had one way in and out? Cry me a river.

The fact is that we fully intended to startle all of you out of your white bourgeoisie existence and force you and your kids to pay attention to the fact that black kids are being murdered by police and vigilantes every 28 hours for no reason. You think your day was ruined? Mike Brown's family had everything ruined. They won't be having a Merry fucking Christmas, will they? Tamir Rice will never see another Christmas tree. So fuck you.
Posted by Not Sorry Feminism at 12:27 PM

I am now officially envious of you: you've marched in more protests that I've ever seen on TV. March on.