This is probably going to become on ongoing series because oh my god, these people.

So I've been speaking out a lot against the GamerGate bullshit on Tumblr, and of course getting pushback. However, thanks to my experience dealing with MRAs and anti-feminists, dealing with these people has been no problem. They pretty much operate in exactly the same fashion, with a whole lot of dishonesty and hypocrisy.

One thing they were pushing, however, really got me pissed off. They're trying to claim that Ian Miles Cheong, editor in chief of Gameranx, is or was a super racist Nazi.

I've been following Ian for quite awhile on Twitter and, no. Absolutely not. Ian is one of my favorite people to follow, and probably my second favorite of the male gender, because he is consistently unproblematic. He does male ally right, which, trust me, is rare. He is a good and kind person, even considering my high standards.

So yeah, it pissed me off to see them try and smear him like this. This actually is one of those things that could be considered libel, because it's serious character assassination and clearly false.

Look. This is their "proof" that Ian is/was a Nazi. 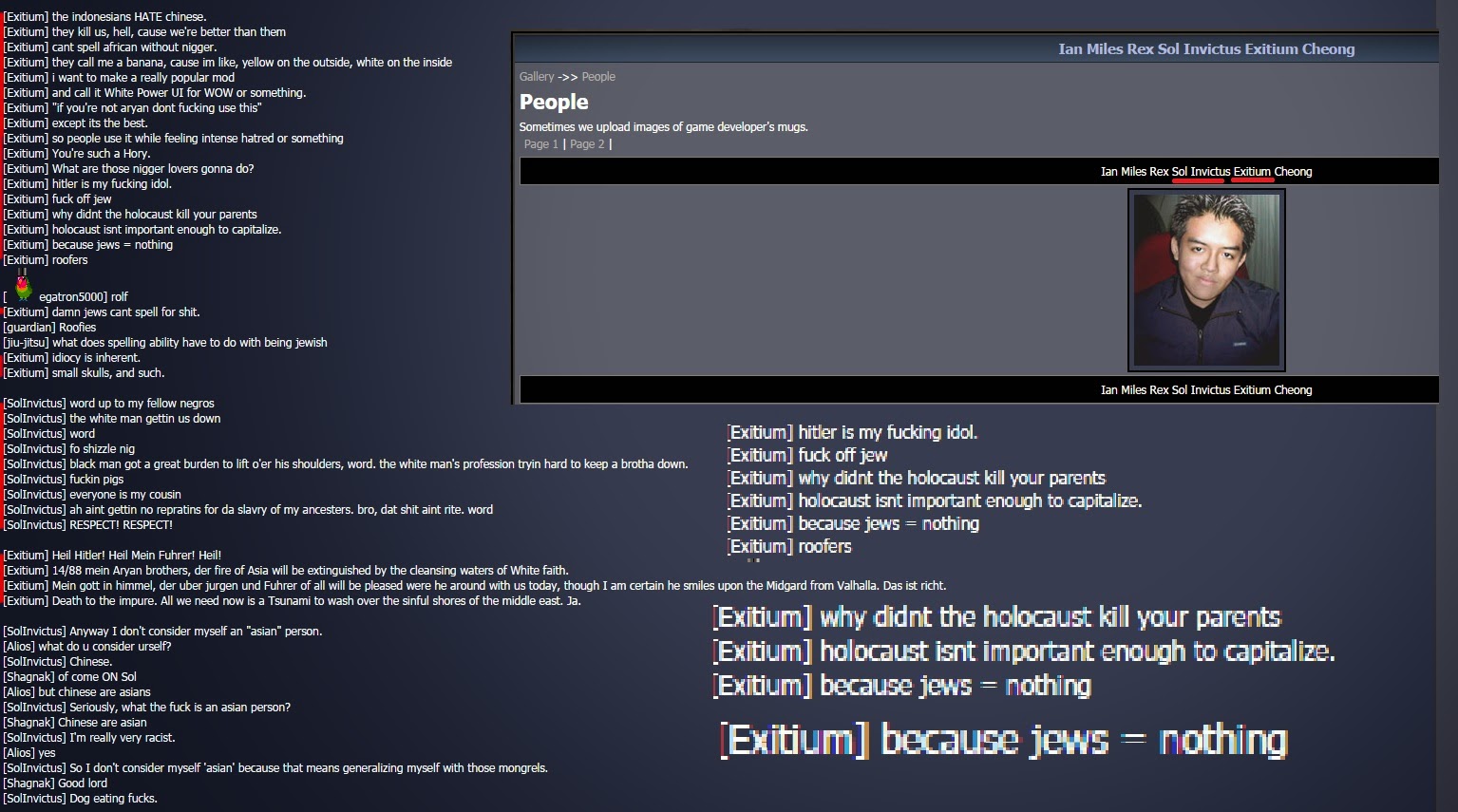 What we have here is an image of a guy who kind of maybe sorta looks like Ian, labeled with his name, or his name around a nickname or multiple nicknames. Where is this from? What website? Don't know. It's unlabeled.

Then we have a bunch of white text on a nondescript blue background. Literally, this could have come from anywhere. Someone could have just typed it in. I don't know if it's even a screenshot. There's no way to tell.

Beyond that, the name of the person saying these terrible things is not "Ian Miles Cheong," nor is it "Ian Miles Rex Sol Invictus Exitium Cheong." There appear to be two different accounts, one called "SolInvictus" and one labeled "Exitium."

Literally anyone could have these account names. Sol Invictus was the Roman god of the sun. Exitium is Latin for destruction or ruin. I bet thousands of dorks use these for usernames. They could literally be anyone, if we're generous enough to assume that these messages weren't simply made up by whoever uploaded this imgur image.

This is literally the shittiest attempt to prove anything about anyone that I've ever seen. I would laugh, if not for the fact that it's FUCKED UP to try and convince people that Ian is a Nazi. And yet, still, such a poor attempt. It's like if someone tried to punch Ian in the face, but was facing the wrong way while doing it, punched a wall and broke his hand.

But yeah, this is the kind of dishonesty I'm talking about. I had multiple GamerGaters send this to me. They have to rely on really badly crafted lies to try and make their side seem better, which ultimately makes them look terrible. Because they are terrible.

GamerGate is going to crash and burn so hard.
Posted by Not Sorry Feminism at 9:30 AM