Worst Way to Remember 9/11 Ever

Here's the thing about the attack on the US that took place on 9-11-2001. It started as a tragedy for US citizens everywhere and ended up a nightmare for millions of people in certain other countries. 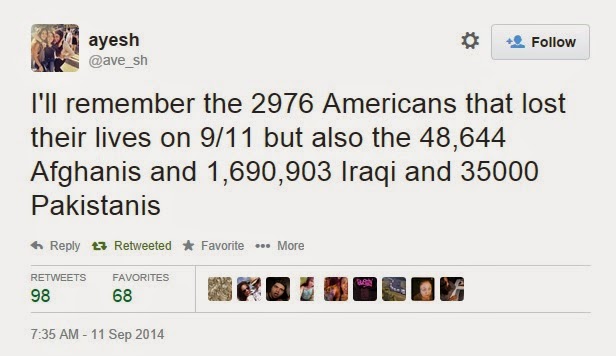 The US leaders took the tragedy of 9/11 and used it as an excuse to bomb a shit ton of civilians in the middle east. It's been 13 years and we're still bombing them with drones as approved by our "progressive" president. And now, this.

President Barack Obama used his prime-time address Wednesday night to announce that the United States will expand its airstrikes against the militant group known as the Islamic State in Iraq and Greater Syria (ISIS), while also preparing to move into Syria to do so as well.

But wait, it gets worse!

“We believe that he can rely on the 2001 AUMF as statutory authority for the military airstrike operations he is directing against ISIL,” the official continued, using the government’s preferred acronym for the group. “And we believe that he has the authority to continue these operations beyond 60 days, consistent with the War Powers Resolution, because the operations are authorized by a statute.”


There are a lot of things that Obama has said and done to make me feel less ashamed to be a US American, but when it comes to this stuff, Obama is just George W. Bush 2.0. He's going to sacrifice so many innocent lives and expand deadly US imperialism just so he doesn't look weak. Fuck that, and fuck him.
Posted by Not Sorry Feminism at 10:29 AM