Why are these even things I have to say?

That is the question that pops up into my mind whenever I think about writing a piece on the stolen nude celebrity photos. It makes me so angry that I keep avoiding it. That, and there are already a lot of great pieces saying the same things that I and nobody should have to say, because everyone should know already.

Do people really think these women had any idea their phones could be hacked? Because I didn't even know that was a thing that could be done. But what if they had taken further precaution and put it on a flash drive or something? What if that flash drive was stolen? Should they have kept the flash drive in an impenetrable safe? How far do women have to go to stop being blamed for the violations against them? At what point will the "precautions" be enough for people?

And why do we have to take them? Why the fuck aren't we allowed to expect that people will respect our privacy? Why do we have to hide our bodies or risk our careers being destroyed? Why can't we expect to be able to take some pictures of ourselves with our phones and share them with our partners or whoever else we want without someone fucking stealing or spreading them?

Well, one of the reasons why is because of victim blaming. Victim blaming fuels rape culture and enables rapists and other people who violate the consent and privacy of women. As long as these criminal scum suckers can count on everybody turning to the victims to point the finger, they'll keep doing what they're doing. Why do you think the conviction and imprisonment rate of rapists is so low? "Why did they keep those pictures on their phones" = "why did you drink so much/wear that/spend time alone with him/etc." And the more you put the blame on the victim, the more you take it off the criminal. Makes leniency a whole lot easier.

The only reason this hacker might be hunted down and punished is because he made the mistake of targeting wealthy white women. But still, you don't see hardly an condemnation of his actions, do you? Hell, his crime is hardly even mentioned. "Leaked" photos. That phrase is everywhere in the mainstream media. THINGS leak, not people. By saying they "leaked," you essentially erase the criminal and let him off the hook.

Oh, the language of rape culture. God forbid we admit what rapists and sick nude-stealing hackers have really done. We can't even focus on the perpetrators unless it's to lament about their supposedly destroyed futures.

One or two good things have come out of this.

I'm pretty encouraged by a lot of celebrity responses, even if the general response by media and regular folks has been terrible. The celebrities will influence the young and the misogynists will die eventually. Maybe rape culture will be severely diminished in my lifetime.

I'm just so fucking tired of people saying that women should take "precautions." Women can do that if they want but don't fucking tell them that they should. They shouldn't have to. Taking private photos, walking down the street, going to a bar, drinking a drink - none of these should be risky activities. But they are. For one half of the population only.

Bottom line, it should not be that way. And if you try and distract from that fact by talking about how women should follow a bunch of fucked up rules that make our lives shitty and annoying, then FUCK YOU. 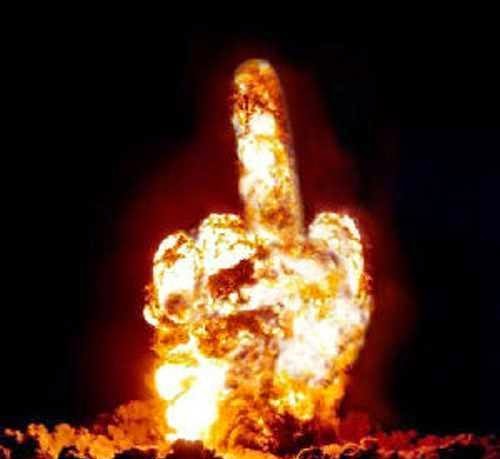 Posted by Not Sorry Feminism at 4:50 PM