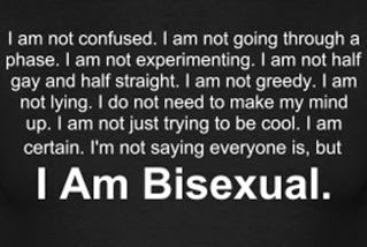 [Image text: I am not confused. I am not going through a phase. I am not experimenting, I am not half gay and half straight. I am not greedy. I am not lying. I do not need to make my mind up. I am not just trying to be cool. I am certain. I'm not saying everyone is, but I Am Bisexual.]

Today is Bisexual Awareness Day. So it's the perfect opportunity for me to address an issue that not many are aware of: biphobia.

Biphobia is exactly what it sounds like - a term that refers to a specific set of prejudices and stereotypes faced by bisexual people.

People who are bisexual often face a lack of acceptance both in the larger society they live in as well as local LGBTQAIP+ organizations. Many complain that gay men and lesbian women will treat them as though they are "not gay enough" or like they're straight people going through a "phase." This often leaves them feeling as though they have no community to turn to for support. I've even seen reports of bisexual persons being verbally and physically attacked at pride parades.

Another big issue they deal with is referred to as "compulsory heterosexuality." When a bisexual woman dates a man, or a bisexual man dates a woman, people will often act as though they are no longer bisexual. They have to deal with the people accusing them of being in a "bisexual phase" of then acting as though they were right all along, and the bisexual person is actually straight. This is erasure of the bisexual identity. Even well meaning people will often refer to these relationships as "straight relationships," even though they're not for the simple fact that at least of of them is STILL BISEXUAL.

Worse, bisexual women are heavily sexualized. I can't tell you how many examples I've seen of men assuming that, when they learn that a woman is bisexual, it's an ideal time to request a three-way with him and his girlfriend. It's often assumed that bisexual women are more sexually available in general than the average woman, which is not true at all. And of course, this leads to higher amounts of sexual assault and rape among bisexual women compared to straight women.

For more information on biphobia, I found a pretty good explanation on the UC San Diego LBGT Resource Center website. I especially recommend scrolling down to check out the "What Does Biphobia Look Like?" list.
Posted by Not Sorry Feminism at 10:30 AM