Ever since someone close to me had a baby, it's become a lot more apparent to me just how difficult it is to be a parent. I'll never really understand unless I have my own, but I know it's harder than it's depicted on TV and harder than any magazine makes it seem.

I've also been thinking a lot about how things have changed for mothers. And how they haven't changed for fathers. In cishet relationships, it's still generally expected that the man will work to provide for the family and not be as involved in raising the child. Those expectations have shifted some in the past decades, but not a whole lot. What has shifted is the expectations for women. Mothers have to deal with so much judgement and policing of all their choices and parenting decisions. I've already talked about breastfeeding and how hard that is, and how it's not an option for all women. But there's more.

I got a message on Tumblr today from a guy who said that he would want women and men to switch places because make "a little" less money and dealing with "some" harassment (HAHAHAHAHA) isn't as bad as the pressure to provide. I don't know if this guy just arrived from the 1950's, but in the present, women are expected to provide. They're expected to have jobs while somehow being just as involved in their child's life. Women still do the majority of the housework and childcare. Plus they're bad moms if they don't breastfeed and then make sure their kids are getting organic, healthy, home-cooked meals (which the women are supposed to make). It's expected that they will be the ones to stay home from work when their school-age kids get sick.

And through all this, they're expected to keep their "figure," maintain their general appearance so that they look perfect all the time, have a social life, and somehow find the energy after all this to always be sexually available to their husbands.

While the man is expected to, what? Have a full time job and pitch in with the kid sometimes? Must be so hard.

As far as I'm concerned, mandatory housewifery and the Supermom trope are two sides of the same sexist coin. Either way, the woman is judged if she's not the perfect mother. Either way, the woman is trapped by society's expectations. Now, instead of everyone judging a mother if she wants a job, conservatives judge mothers who want a job and liberals judge women who want to be stay-at-home moms.

There is no winning.

This is what it looks like when we just focus on "equality" instead of addressing the root problems and expecting men to do their fair share. This is "equal under the law." Now both women and men can have whatever job they want! Only women are still expected to do all the other work. Hooray? 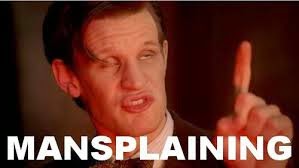 Women provide meals every day, but they're not considered chefs. They take care of the sick, but they don't get the respect that doctors do. They do most of the cleaning, but where is their paycheck?

Nowhere, because it's expected of them. They're women, so they should just do it. That's sexism.

Let's not forget the fact that being a Supermom is only even remotely achievable for a certain type of woman - one who has enough privilege and money to afford outside childcare and doesn't have any illness or disability. And of course, is cishet.

Is this really an improvement? Sure, it's nice that people now know that women can do anything men can do. But why isn't it expected that men should do everything women do? Why is it all on women? Why do we get all the criticism for everything and men get all the free passes, plus praise if they so much as take the kids to the park sometimes. Aren't men capable of doing their fair share of the work? Wouldn't that be true equality? Yet its funny how MRAs and "egalitarian" men never seem to find the time in all their whining to advocate for recognizing that men can do all the things women do, and should. So funny.
Posted by Not Sorry Feminism at 10:27 AM