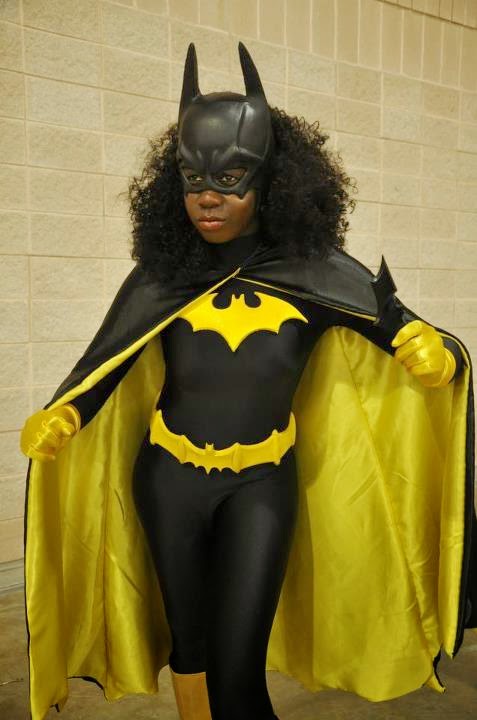 Have you heard of Jay Justice? I don't know if that's her real last name, but if so, AWESOME.

She's a black woman who loves to cosplay comic book characters despite the mobs of racists who tell her it's not acceptable because it's not "accurate." Funny how you never hear them saying that when white people do alternate interpretations of characters, like steam punk Link or some shit.

(Speaking of, have you seen the Pokémon GijinkaDex????? It's INCREDIBLE. Anyway.)

There's more to Jay Justice than the best name ever and incredible cosplay and being a badass who stands up to racists. She does charity work in her costumes, and wrote the following about how she inspires sick children of color:

When I do charity events dressed as Batgirl, all the children of color are absolutely overjoyed. They literally embrace me and I can see them realize that their own race and skin color is not a hindrance to their creativity, as everything they see and experience has been telling them ever since they were old enough to process media.

The white children are hesitant and some attempt to quiz me or insist that I’m not ‘right’ or ‘real’. They are repeating what they have been told and what they have seen all their lives. I explain that Batman believes that anyone can be a hero if they are a good person and work hard, no matter what they look like. So of course Batgirl and Robin can be Black or Chinese or Spanish or anything, because that doesn’t change who they are.

The kids accept this and by the end of the event we’re all holding hands and talking about video games. I think representation is more important than ‘accuracy’ and I won’t be involved with an organization that doesn’t agree with that.

Seriously. Representation matters. I will get in the face of anyone who says this amazing woman or any other women of color aren't allowed to cosplay white characters. Fuck that.

Please visit her page for more awesome cosplay and general awesome! She deserves the visits.
Posted by Not Sorry Feminism at 11:00 AM