So last night there was some kind of awards show. I don't watch award shows because I find them to be boring, and not just because every reporter asks every woman walking down the red carpet the world's most uninteresting and sexist questions. But also that.

Thankfully, everyone else is starting to notice this and they're done putting up with it.

During said awards show, people took to Twitter, as they do, with the hashtag "#AskHerMore." Many included helpful suggestions directed to reporters about what they could ask the celebrity women. You know, something about their work that doesn't involve how they lost weight for a role. 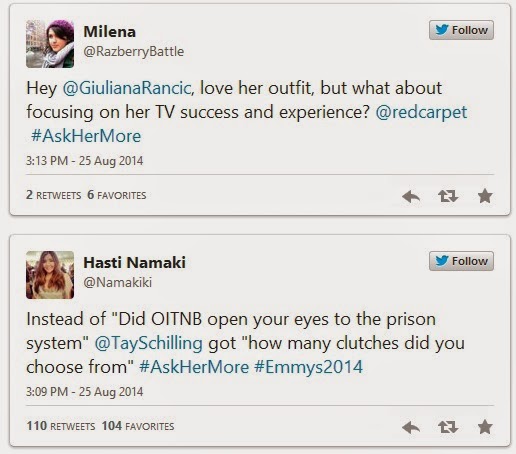 You can see plenty more here.

I love that people are calling this out now. Not just people on Twitter but celebrity women themselves.

The answer is no.

Allow me to take this opportunity to shove this into some faces. Yeah. Feminism is spreading. Celebrities are getting into it and all their fans are going to get into it and there's nothing you can do to stop it. FEMINISM EVERYWHERE HAHAHAHAHAHA.

Posted by Not Sorry Feminism at 12:21 PM