You might have already heard of Mo'Ne Davis, the superstar pitcher who is only 13 years old and only the 17th girl to play in the Little League Baseball World Series! She can throw at 70 mph, and has been throwing a bunch of shutouts, including the first ever thrown by a female player! 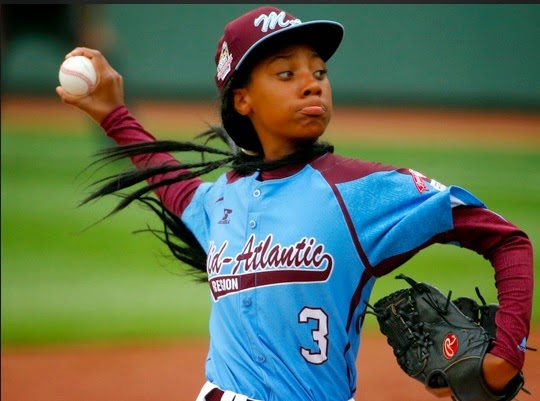 I don't know much about the sports, but I can say that when you stop telling women that they're not as good at them as men/boys, that they should do more "girly" things and generally stop discouraging them from doing the sports, they tend to prove that they're actually really fucking good at the sports.

This is my favorite part:

When Davis was asked by ESPN post game how she dealt with excess media fascination, she had a perfect answer.

"I can always say no," Davis said.

This girl is an inspiration to me and I'm nearly twice her age. You fucking go, Mo'Ne Davis!
Posted by Not Sorry Feminism at 10:33 AM