Found on Reddit (serious trigger warning for gross comments), a woman posted an image of a spreadsheet her husband made which documented each time he asked her for sex, and if the answer was no, the reason she gave (if the no was verbal).

If this doesn't creep you out, I don't know what will. 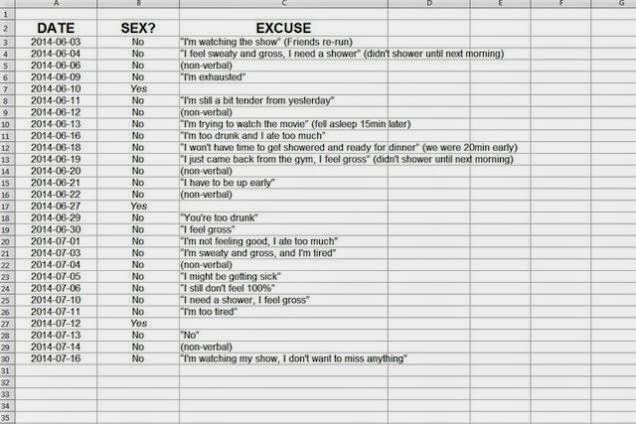 I got the image off of Tumblr because the original has been removed from the Reddit thread, but the various "excuses" (by which I mean totally valid reasons because ANY REASON IS A VALID REASON TO SAY NO TO SEX) include that she was in the middle of watching a TV show, she felt unwell, she felt sweaty and gross (BUT SHE DIDN'T SHOWER UNTIL THE NEXT MORNING, GASP), she's tired, or she's full of food.

He then sent this to her in a passive aggressive email while she was on the way to the airport for a work trip. Then he apparently wouldn't answer her attempts to contact him.

A lot of the commenters on this incident are saying that the women's reasons for saying no are "bullshit." And you know, they're probably right. I think they're bullshit, too. Why? Because women aren't fucking allowed to simply say "no." They're not allowed, in our society, to say "I'm not in the mood." We have to make up bullshit excuses when we don't want to have sex on command because "I don't want to" isn't good enough for men. Our "no" is considered the beginning of a negotiation. We always get the whiny follow up questions. "Why not???" And then we're badgered until we come up with a reason that men deem good enough. Except it's never good enough, is it?

Yes, this woman's "excuses" were probably bullshit. Because I'm guessing the real reason she didn't want to have sex with him is because he's a shitty, passive aggressive little man-child who can't even confront problems like an adult, but instead throws tantrums when he doesn't get what he wants. Who would want to have sex with a guy like that?

In the poor woman's replies to the awful Reddit comments about her situation, she concedes that yes, there has been less physical intimacy in the relationship. "Isn't that allowed?" she asks. Of course, for most Redditors (read: entitled men) the answer is no. She isn't allowed to do what she wants with her body. Her stress and concurrent loss of sex drive doesn't matter. She is obligated to have sex with a man when she doesn't want to, because she married him.

In legal terms, this is called rape. But who cares, right? She married him, so now he owns her, I guess.

She also explains that part of her stress is due to the fact that she keeps the house clean, she cooks for him, and she does his fucking laundry. Do the Redditors respond by telling her to explain to her husband that maybe she would be less stressed and more inclined to want to have sex if he would just do his fair share of the goddamn domestic work? Of course not. "If you want to have intimacy you need to make an effort to prioritize it," says one Redditor, ignoring the fact that SHE DOESN'T WANT "INTIMACY," HER HUSBAND DOES. What she obviously wants is for her husband to stop being a whiny pissy little baby and have some fucking sympathy for her while she's going through a stressful time. But her needs and wants don't matter in this culture. The man needs sex, so she has to give it to him. Awesome.

It's too bad that she decided to post this issue to a community as toxic and misogynistic as Reddit. I hope she sees this pop up on better sites and feminist communities who will encourage her to dump this pile of soggy man-baby tears. Then the last item on the spreadsheet can say "no" with the reason of "because I'm divorcing you."
Posted by Not Sorry Feminism at 10:45 AM

Great post, I love your point about this not being about sexual intimacy. I can't imagine what kind of mind makes a spreadsheet instead of having a conversation!

I can't imagine this kind of pressure. She must feel so trapped. He is literally tracking and critiquing her responses... No wonder she doesn't want any intimacy. This is the definition of uninviting.